Much to my surprise, Wednesday night, just before I went to bed, I looked out of the window and discovered everywhere was covered in snow. The park was white and so were the roads. Even by 8 in the morning the roads were still white. Not enough traffic to help get rid of the snow. We had toyed with the idea of going to the bowling alley but not sure now with the roads like that. I don't know if either of us can bowl of course, just have to try it out. Maybe we will leave it til Monday. In the end we didn't go to the bowling alley as they said it was very busy and full of kids. Apparently they go back to school on Monday, so we will try then. I'm not sure if either of us can bowl - Matt doesn't walk too well and I have leg problems because of Peripheral Arterial Disease, so we may have to leave it for a while yet.

Been very tired lately anyway. I am even falling asleep during Jeopardy, and that is very serious. It is, after all, my favourite programme.

Before I went into hospital I bought a top sirloin roast. I don't remember doing so you understand, but I found it there when I came home. Saturday I finally got round to cooking it. I checked online and

found I could dry roast it so that's what I did. I poked garlic into the meat and followed the directions online. The timing was a little bit too long so the meat was more cooked than we normally prefer. However, it was delicious. Not only that, I made the best gravy I have made in a while, either that or it tasted good because I haven't made it in quite a long time. I was very pleased with the top sirloin and will certainly buy it again when I see it on sale. I bought frozen Yorkshire Puddings which is the lazy way out but they are pretty good.

I still haven't got my desktop fixed and so it took me forever to get that picture put in place. This wandering cursor business is a real pain. I should get him to check that out too - dunno if he can do anything, I have tried everything they say to do on the net. So, once again, posting a recipe is almost impossible. I am hoping my computer guy will be back this weekend and not spending a long time in his home country. Fingers crossed. At least having this laptop is some consolation, but all my more important stuff is on the desktop - financial, addresses/phone numbers, etc.

Today is January 6, or 12th Night which means traditionally we can take down the Christmas decorations. As we didn't put much out, it won't take us long. I recently learned, from a TV programme, that in the early days of Queen Victoria's reign, we actually did celebrate for 12 days and bakers made 12 day cakes which were absolutely huge. Maybe the origin of the Christmas Cake? I decided to link you to Mary Berry's 12th Night Cake. 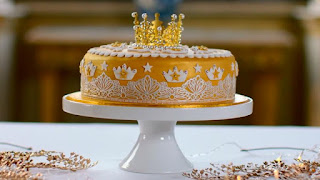