Went to the Red Lobster and used our discount coupon for lunch. Apparently if you choose a dinner item, you get the dinner discount. Don't quite understand their logic but I am not complaining. Matt had a tilapia and shrimp dish which is spicy, it has 3 slices of jalapeño (I think) as garnish and Matt ate one. He didn't really know what it was. He found out!! Drank a lot of water. I chose an "Ultimate Feast" again, I particularly wanted some crab legs. I had taken my lobster pick with me which is much smaller than the fork they supply. Enjoyed it. I didn't bother with broccoli or any other veg and no sides of any kind. They knocked $1.25 off for that, nice of them.

Then went to the hair salon - decided I wasn't ready for a cut yet. She cut an amazing amount off Matt, incredible, she did all the things like ears and eyebrows. She also took a straight razor to his neck. Could have cut his throat with that. I forgot, she made me a cup of green tea whilst I was waiting. I was very impressed. She is a very nice woman. Matt doesn't remember going to her before, but he was impressed with her today. Well, when I had my hair cut she did the stringing I mentioned. Fascinating how she gets the string to vibrate and pull out chin hairs etc. Never seen that done before.

I might mention that it is bloody cold outside too. Coldest I have felt in a while.

Today, as I said, I have to go to the Cannabis doc for a renewed scrip. In the afternoon, I want to study the document the superintendent says he has from the Landlords and Tenants Board giving our landlords the right to increase the rent by 4.8%. If this is true, I will be making a noise about why none of us have been so advised by the Board. That, in our case, is over $60 a month. That is going to put a big strain on our budget although, I forgot, Matt just got a $5/month increase on his work pension. Makes the raise $55 I guess!!!

As so often happens, the picture grabbed me on this recipe. Not sure if I can get Spanish chorizo. I know I can get Portuguese but am not sure it is quite the same thing. My mother always had some on hand when they lived in Spain and we used to chomp on it all the time.

This is the hearty, rustic, and deeply warming comfort food you'll be craving on all snowy days. Yes, it’s a large amount of paprika, but it serves as a base flavor for the stew and gives it a deep red color 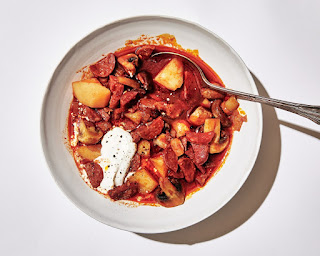 1. Cook bacon in a large pot over medium heat, stirring occasionally, until beginning to brown but not yet crisp, 5–7 minutes. Transfer to paper towels.

3. Stir sour cream and 2 Tbsp. water in a small bowl to combine; season with salt.

4. Divide stew among bowls and top with sour cream, dill, and a few grinds of pepper.