I have bitched about the shopping before, had arranged for someone to help on Wednesday, nobody available, so decided to go ahead and pick up Monday. When I got home, I discovered a bunch of stuff was missing, it didn't seem to have transferred through at all. Not sure why. The young man who delivered the groceries to our trunk was really helpful with a couple of things though. We have a chandelier which takes bulbs with the tiniest threads and he finally found them for us. Also a couple of those Grand Ferero Rocher I talked about last week. Yes I know, shouldn't have them, but... they really are delicious. We both ate the whole outside chocolate again this evening. Greedy pair.

Liz Seckman asked if we didn't have some young men in the building who would help with the shopping. Not as far as I know. She has four hulking great sons. Wish we were close.

So, hopefully the driver will be here tomorrow (today now) to take us to Matt's hospital appointment with the urologist. Talking of which, I seem to be having pain in my right kidney, will try and ask him about it when we get to the hospital, or before we leave.

This is a recipe I have just come across and have bought some drumsticks with which to make it. I do like drumsticks very much for their moist meat. This is  actually delicious. I cheated a lot, used coriander powder and dried tarragon. Crème fraîche was sour cream or cream with a little lemon juice. However, we both thought it was good. Forgot, no crusty bread, served it with egg noodles. However, the times quoted are a lot of nonsense, took a lot longer to brown the drumsticks for a start. But I do highly recommend this. Certainly a recipe I will cook again. I had 10 drumsticks in the end, had 3 each tonight, 2 for tomorrow. I could have eaten 5 quite happily. I might make up the quantity with some chicken breast.

Melissa Clark's favorite part of the chicken is the drumstick, because it's juicy and easy to brown. She likes using only drumsticks in this mustardy stew—thickened with tangy crème fraîche—so that all 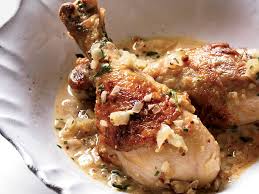 the meat cooks at the same rate.

1. In a large skillet, toast the coriander seeds over moderately high heat until fragrant, about 2 minutes. Transfer the seeds to a mortar and let cool. Crush the seeds coarsely with a pestle.

2. In the same skillet, heat the olive oil until shimmering. Season the chicken drumsticks with salt and pepper, add them to the skillet and cook over moderately high heat, turning, until golden brown all over, about 10 (at least 20) minutes. Add the onion and cook, stirring occasionally, until softened, about 3 (5) minutes. Add the garlic and cook for 1 minute. Add the broth and crushed coriander and bring to a boil. Cover and cook over moderately low heat until the chicken is cooked through, about 15 minutes.