Bowling today of course, and my first two games were appalling. You would have thought I had never held a bowling ball in my life, I redeemed myself with my third game, but my average has taken a plunge. One thing, however, I wasn't suffering as much pain in my legs as usual. Not sure what's doing that, could be a combination of things. Whatever it is, I was grateful.  Despite my performance we took 6 of the 7 points available. We are currently in 4th place. Having phoned ahead, I dropped into The Grain Harvest where I buy buns I like, she had saved me 48 (if they go in the freezer they are sold for half price, I'm not stupid!!) however, that's a lot of buns, and heaving them upstairs to the apartment was not easy. Had to sit for a while. However, I have enough for quite a few lunches. So the pain got me in the end!!

Duuh, I wrote to the wrong political office so they referred me to the right one and I composed another email about Tylenol 3. I wish I had a magic wand, I would gift some of these politicians with the kind of pain seniors get, just for a couple of days, so they would know what it's like. Not just seniors of course, but they are apparently being targeted at the moment.

Tomorrow (today now I guess) we are going to the Mandarin for lunch with our usual friends, seems like quite a while since we went but Moon Festival is still on so it can't be that long ago. Wonder if they will have any moon cake left. I recall, one year, going late in the season of the Moon Festival and they had run out of moon cake.

Using leftovers (Marmalade Pork Tenderloin) for supper Monday night, I needed an extra and had some spinach in the fridge so I prepared this, it wasn't bad. Of course, I didn't make nearly as much as the recipe says. 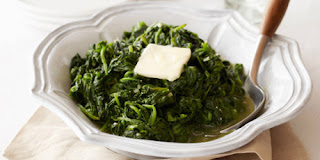 1. Rinse the spinach well in cold water to make sure it's very clean. Spin it dry in a salad spinner, leaving just a little water clinging to the leaves.

2. In a very large pot or Dutch oven, heat the olive oil and saute the garlic over medium heat for about 1 minute, but not until it's browned. Add all the spinach, the salt, and pepper to the pot, toss it with the garlic and oil, cover the pot, and cook it for 2 minutes. Uncover the pot, turn the heat on high, and cook the spinach for another minute, stirring with a wooden spoon, until all the spinach is wilted. Using a slotted spoon, lift the spinach to a serving bowl and top with the butter, a squeeze of lemon, and a sprinkling of sea or kosher salt. Serve hot.