Monday night we watched an English documentary The Truth About Sleep which I found very interesting. It was hosted by a doctor who had given up being a doctor because he was an insomniac and became extremely bad tempered due to lack of sleep. Not good for patients. There is, apparently, a lot of research going into sleep deprivation in the UK and they carried out a few tests in conjunction with some research labs. The ex doctor said he would go to sleep til 3 a.m. and then that was it. By the end of the programme he was getting a much better night's sleep. So by this time I was too tired to write a blog and so went to bed, I had to take the car in for service at 8 a.m. The programme must have affected me because at 3 a.m. I was wide awake. I did manage to go back to sleep about an hour later. At the end of the programme they tried a few old wive's tales or similar. One was to eat 2 Kiwi fruits an hour before bed (could get expensive) another to have a hot bath an hour before and to go to bed in a cold bedroom. Mindfulness was also tried, but the ex doc himself was taking a probiotic powder in a drink before he went to bed and it really seemed to work. Sleep deprivation can lead to weight gain and diabetes which can then be followed by strokes and heart attacks. Not to mention driving, there is an ad on our local radio station "Never drive when you are DEAD tired".

I made it to Meineke for 8 a.m. and got our free service (from now on we have to pay again and build up points to get more freebies) - I asked them to check our back tire, passenger side. Turns out it was leaking air at the rim and they took it off, cleaned and resealed it. So I'm good to go for a day or two. Oh, nearly forgot, Monday I went to the asparagus farm (what a surprise). 18 months ago they pulled up a bridge so we had to get a new route. Toodling along the country road I found they were pulling up the road where I wanted to go. I was somewhat annoyed, putting it politely. It's a fairly long drive, then I remembered I could back track slightly and use a different junction which I did. My luck, they will decide to close that road as well although there are two golf courses, one, a major one, and I don't think they would be too happy if people couldn't get there for a couple of years.

Today, Tuesday, I ordered my groceries on line again. This is actually saving us money because I see how much I am spending as I add things to my order and not being in the store, do less impulse buying.

I have been hunting for more large Mason jars. I can buy them in packs of 12 but I only want a couple more. I have now been told that one of the local dollar stores, Dollarama, sells them individually. Just phoned them, they do sell them individually. Hurrah. I gave my asparagus pickling recipe to one of the women I buy asparagus for. She is almost as nutty about the stuff as I am. Only got a couple of weeks to go before the season is over. Those of you who don't like asparagus will be relieved!!

Asparagus is enjoyable in a salad and this is a good one. 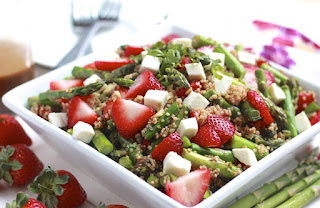 1. Place the cooked quinoa in a large salad bowl.

2. Prepare the balsamic vinaigrette and set aside.

3. Heat the olive oil in a large sauté pan over medium heat. Once heated, add the asparagus and garlic. Sprinkle with salt and pepper. Cook for 2-3 minutes until the asparagus is bright green and slightly tender, yet still has a little crunch.

4. Add the asparagus to the quinoa. Mix in the strawberries, mozzarella cheese, and the balsamic vinaigrette. Toss to combine. Top the salad with chopped fresh basil.