Having checked with the grocery store, they will not be having any more 1 litre Mason jars in this year?? They have smaller ones, but not much use to me, although I guess I could chop the asparagus up in pieces I suppose. I am now in a quandary, do I put these jars aside until later in the year, or do I open one to check it is OK? By the way, it wasn't 5 lbs of asparagus, it was $5 worth. Of course, if I plan to do any more, I really should check these are OK although I don't really want to open a jar.

This morning was one of our Coffee Klatsche days so I went. Matt did murmur about going yesterday but changed his mind pretty quickly. The attendance is not as big as it was I don't think. I read out a joke I had got in the email and someone read a couple one of which I have been passing around ever since.

A married couple, arguing who should make the morning coffee. Husband says she should, she does the cooking. Wife says no way, and you are up, first apart from which, there is an instruction in the bible. Husband says what are you talking about, wife opens a bible and points to the book heading "Hebrews".

Don't think I've mentioned, I was complaining about unsweet strawberries. Girl at Barrie's farm said to try theirs, just picked that day. We ate them last night, they were delicious. Didn't need sweetening at all. Trouble is, I can't buy more than one punnet as they wouldn't keep for long. I have also seen peaches in the store. The White Flesh ones seem to be the ones which are clingfree - that's what I was buying last year anyway. I love summer fruits - not that keen on the winter ones. of course I have to have cream and often use them in a Pavolva.

I often see recipes for "bowls" like this, thought I would try this one asap especially as it includes my favourite.

With tons of colorful vegetables, sesame rice noodles and a healthy peanut sauce, this noodle bowl is 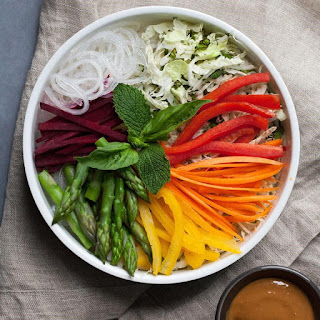 a hit with adults and kids alike. Assemble the bowls before serving or let everyone make their own. Serve with Sriracha hot sauce, if desired.

1. To prepare noodle bowl: Prepare noodles according to package directions. Rinse well with cold water. Toss with sesame oil. Bring 1 inch of water to a boil in a large pot. Place a medium bowl of ice water next to the stove. Cook asparagus in the boiling water for 30 seconds, then transfer to the ice water. Drain well, pat dry and cut into 2-inch pieces. Combine cabbage, basil, mint and rice vinegar in a medium bowl. Divide the noodles among 4 bowls. Top each bowl with ½ cup of the cabbage mixture, some asparagus, carrot, beet and red and yellow bell pepper. To prepare sauce: Whisk peanut butter, tamari (or soy sauce), water, rice vinegar, honey, garlic and crushed red pepper (if using) in a small bowl until smooth. Drizzle ¼ cup sauce over each bowl

People with celiac disease or gluten-sensitivity should use soy sauces that are labeled "gluten-free," as soy sauce may contain wheat or other gluten-containing sweeteners and flavors.

Author Notes
To make ahead: Refrigerate sauce for up to 2 days.