Here is a bit of trivia from How To Geek. The annual production of wine in France, when measured by the bottle, usually exceeds the world population. We could all drink a bottle of French wine and there would still be hundreds of millions of bottles left over. So, for those of us who enjoy our wine, we needn't worry.

I don't know if you remember but about a year or go, or a bit longer, I was moaning that my La-Z-boy had broken and the footrest would no long stay up. I got in touch with La-Z-boy who referred me to another company called Vynew. They said they would send someone to look at the chair and it would cost me $60 which, if I had the chair repaired, would be rolled into the final cost. They sent a guy with totally fractured English who turned the chair upside down and took some photographs, told me it was mechanical (I could hardly understand him but I already knew it was mechanical!) charged me $60 and disappeared. I then had to call Vynew again and they said they would repair it for $160, and no the $60 would NOT be rolled over. I was furious and have not done anything about it since. Along comes Wayne Berry to fix my VHS player. I mentioned the problem to him and he took a look but said he didn't think he could fix it. A couple of weeks later he called and said he had had an idea. He called today, Friday, took away a part, drilled a hole in it, came back and fixed it. The chair now works fine and it cost me $80. I plan to get in touch with La-Z-boy again and complain. Probably won't do me any good, but.....  I suggested Wayne give me some of his cards to distribute. Gave a couple away at Exercise Class. I know we will need him again, especially if we move into something smaller.

It seems to be the vogue these days to minimalize or downsize - the first person I know who did this was Ivy the Happy Whisk. She got rid of so much stuff, I am surprised they still had a bed. However, I am beginning to hear of more and more people doing this, a friend in the building for instance, plus others I know. I can see the point, but I am of the school of thought "I might need it" we got rid of a propane burner which was for doing things like Creme Caramel, I had never used it, guess what, within a week of getting rid of it, I needed it. If one cooks as much as I do, I can't imagine not having access to all kinds of items. As for anything else, we mostly use what we've got. I have sold off a few things over the years, but I still seem to have one heck of a lot, but I use it.

Tuesday, I am taking the car in for service, have to be there at 8. Dreading it, but at least I will be first in line. Monday I have to get to the hardware store for more large Mason jars. I also need to get to the asparagus farm as well.

This is another recipe I haven't yet tried and bearing in mind the farm sells both asparagus and rhubarb, you'd think I would have done so by now. 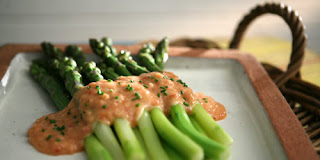 1. Bring a pot of water up to a boil and salt generously. Trim asparagus and add to water. Blanch, uncovered, until tender (check by tasting – time will vary depending on thickness of asparagus). Once tender drain and shock in a bowl with ice and water to halt cooking. Strain and chill until ready to serve.

2. For hollandaise, stir rhubarb, sugar and tarragon sprigs in a pot over medium heat. Simmer until rhubarb is just tender, about 10 minutes. Remove tarragon and keep warm (but not hot).

3. To assemble Hollandaise, whisk egg yolks and lemon juice over a pot of gently simmering water until they hold a ribbon when the whisk is lifted. Whisk in rhubarb mixture to warm. Remove bowl from heat and gradually whisk in melted butter (try to avoid adding white solids that have settled to the bottom of the butter). Season to taste and keep warm (hollandaise should be prepared as close to serving as possible)

4. To heat asparagus, simply warm in a sauté pan over medium-low heat with butter and season lightly. Place warm asparagus on a platter and spoon hollandaise over. Garnish with chives and serve immediately.