I think the electrical gremlins are out to get me. I put a piece of bread in my toaster oven and even on its longest time, I got a piece of dry white bread. I had been having difficulties with it such as baking potatoes just didn't seem to work, but that finally made me realise something was wrong. However, I am being sent a new one as it isn't very long since I bought this one.They identify the age with a number on the plug and often ask for one to cut off the plug and return it. However, the guy I was talking to, said you (Canadians) have to pay so much for postage, just send us a picture. I was pleased, because I defrost/toast a bun in it for lunch and although it doesn't work properly, it does do the job, kind of.

May not just be electrical gremlins, I ordered printer inks from Newegg ages ago, they haven't arrived and despite lots of contact I still haven't had a refund. They keep sending me a copy of an email to the supplier, established on Jupiter I assume, takes such a long time to get a response. I have to start chasing them again. Later - I phoned them again and I am promised a refund in about a week.

I had a thoroughly lazy day other than phoning people. Supposed to go to our coffee klatsche this morning but didn't get off  the phone soon enough. This afternoon was exercise class, didn't go to that either. Can't remember if I mentioned our league bowling was moved to Thursday.

This recipe is touted as being no cook - presumably because of the summer heat - not round here lately although I understand we are going up into the 30s at the weekend. I thought this looked pretty good. Matt not too crazy about avocados but maybe done this way....

Transform an avocado into a showstopping dish that tastes even better than it looks. Just cut slits in 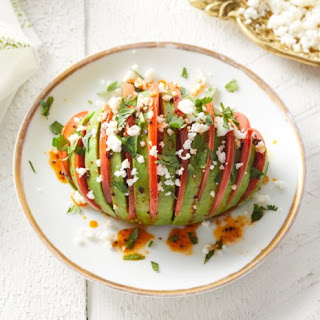 an avocado half using the hasselback technique, then add tomato, cheese and a flavorful dressing for a healthy Mexican-inspired side.

1. Place avocado halves cut-side down on a cutting board. Make crosswise cuts every ¼ inch along each half, slicing almost to the bottom but not all the way through. Carefully transfer the avocados to a serving platter. Fill each cut with a slice of tomato, skin-side up.

2. Combine oil, lime juice, chili powder, salt and pepper in a small bowl. Drizzle over the avocados. Top with cheese and cilantro.