I am not basically a pizza eater, I used to eat them many years ago in Italy and Paris when they were relatively simple creations but the North Americans got hold of them and – in my opinion – ruined them. However, Wulfgang Puck has come up with an Oscar Party pizza which I am sure I would find delicious. In fact the only reason I would like to be important enough to attend an Oscar party is to be able to try the goodies presented every year by Mr. Puck and his staff. I would also like to have the opportunity, chance, and money to dine at Spago’s. What really tees me off, I can have the smoked salmon but, because of this stupid illness of mine, and the antibiotics which go with it, I cannot drink the champagne. If you plan to watch, enjoy the Oscars, I believe that after what happened, American Sniper will win. 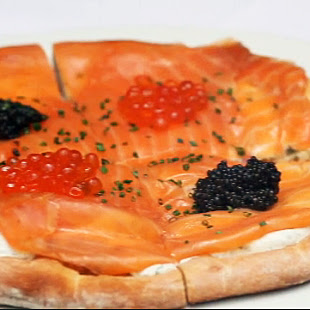 Each year, Hollywood's A-listers are served Wolfgang Puck's signature smoked salmon and caviar pizza at the annual Oscars Governor's Ball — and now you have a chance to taste it, too!

Pizza With Smoked Salmon and Caviar

Have a great Sunday