I am quite excited to discover that there once was a woman, Maria

Duttson Cattermole who died in 1912 in London, Ontario where she is buried in Woodland Cemetery. Apparently the funeral home which handled the arrangements has closed since that time so I have been contacting London funeral homes in the hopes of finding which one has the records. I do hope I can find them. My maiden name was Duttson in case you don’t get the connection. Incredible really, I have a relative in Australia who wrote to me about this originally. It’s a small world. The Grounds Superintendent has offered to send me a picture of her headstone (if there is one) when the snow has gone. 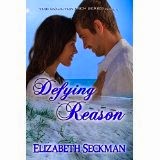 which was written by Elizabeth Seckman. It was actually the third of her Coulter Men series. I really enjoyed her books and can recommend them to anyone. Her most recent was Defying Reason which was, in fact, the first book I read in the series.

I love shrimp so often choose shrimp recipes. This one sounded somewhat different. 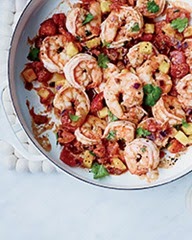 Chef Deborah Schneider calls this easy, 12-minute dish “firing-squad shrimp” because it gets a little spice from a chipotle in adobo sauce.
Ingredients
Have a great day