Matt has his driving license interview tomorrow morning, Wednesday. When they take an hour and a half to find out it you can drive or not – now he is 80. They ask you questions to establish your cognitive abilities. According to friends they are so simple as to be almost insulting. I might go with him as they are turning off the water once again and there will probably be no heat as our heating system is water based. So I went to the movies and when I returned they had phoned to say his interview/class was cancelled and postponed until the end of April? No reason given, we are somewhat puzzled. They have to send him another extension of his license to cover the period. 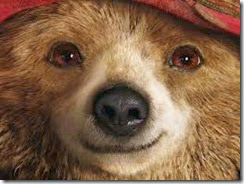 ovie, Paddington. What can I say, I absolutely loved it. Beautifully made, and, my friend agreed, we never once thought of Paddington as anything other than a bear. It was hilarious, sad, adventurous. Absolutely wonderful. I will certainly be buying the DVD when it comes out. I understand from another friend the cinematography is excellent, I have no idea. The beginning, in Deepest Darkest Peru, surprised

me, I was not expecting it and thoroughly enjoyed it. My friend commented about the eyes and the facial expressions they achieved, I mean, just look at this picture. You could fall for this bear. In this second picture can’t you just see him thinking “uh oh”. If you haven’t seen it, do go. I know you will enjoy it.

After the movie we went over to the Lindt Store – I was telling the Beer for the Shower guys about it. When we walked in they gave us both a Lindor Ball, yum, I love those things. Then I asked about one that was available only at Christmas apparently but they gave me a similar one to try. I think I could have tri ed one Lindor Ball of every flavour in the store. I bought Matt a box of deep dark chocolates. It turned out the boxes of 13 balls were on sale for $6 a box if you bought two. Nothing loath, I bought two. One box for me of course, of mixed balls. On Matt’s box the assistant taped a red heart 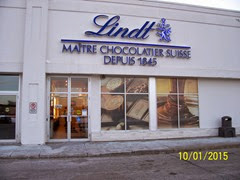 (chocolate inside of course) for Valentine’s. I managed to get a couple of pictures before my camera decided to give up the ghost on me. (Batteries!!). This is a somewhat fuzzy one of the loose Lindor balls. Dozens and dozens of them.  I could have made myself really sick there I think. My friend said she would be delighted to bring me to this store whenever I wanted. Dangerous.

Now here’s another recipe you could use for that Valentine’s dinner and probably somewhat easier than the one yesterday. I got this from the Dragon Knight, Jeff Hargett, of Strands of Pattern who plans to try it out. He got it from Recipe Palace. I wonder if these would fit into my diet plan? I am not big on cooked apples, but these do look good.

These little guys will send your taste buds soaring! 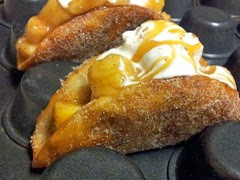 DIRECTIONS:
Place apples, sugar, cinnamon, nutmeg, and water in a sauce pan. Stir until well blended and cover and cook on medium stirring frequently for 10 minutes or until apples are semi soft. If needed, thicken sauce using 1 Tbl of cornstarch to 3-4 Tbl of water. Mix into sauce and stir until thickened. Heat oil on medium heat in a skillet and holding the tortilla folded in half, place the bottom of tortilla in the oil for a few seconds. Then lay it on one side until browned and then place other side down until browned. Remove from oil and Sprinkle browned tortilla with sugar-cinnamon mixture. Fill taco shells with apple pie filling and top with whipped cream, and sprinkle a little more of sugar-cinnamon mixture on top.