I’m not really blogging yet, but I was just concerned you might all be hungry unless I sent you a recipe. I saw this one and just had to share it. It might even tempt me during my current lack of desire to eat anything at all. 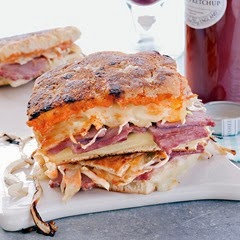 At The Sentinel, Dennis Leary's riff on a Reuben uses locally made corned beef and fresh focaccia, but the sandwiches are just as delicious with top-quality deli corned beef and store-bought flatbreads.


Have a great weekend