I was delighted to read, in an email from World Wildlife Fund, that President Obama has pledged assistance in the fight against wildlife crime in Africa. I didn’t realise that the crime involved syndicates which makes it a much more major issue than I had realised, even though I was fully aware of the seriousness of the problem. Elephants and rhinos are being decimated in order to steal their tusks and horns, I cannot quote the current figure, but the amount of rhinos killed this year is well into the hundreds – I checked, 367 at the end of May. Obama said "The entire world has a stake in making sure we preserve Africa’s beauty for future generations."  I 100% agree with him.

one more time to Barrie’s Asparagus farm – then our friends cancelled. Still, I now have lots of asparagus.  Being a holiday, they were pretty busy, and didn’t look to have too many helpers. I guess they were on holiday too. Of course, as Tim Barrie’s sister pointed out, they are open all year, but I basically only go there for the asparagus. They have lots of wonderful local products and produce, but it is not really worth our while to travel half an hour both ways for things we can get closer to home. Yesterday, I saw their piglets for the first time, they were rooting around at the asparagus I guess. Cute little things, but one day they will be in their freezers as pork chops and such. Not sure I could do that.

Talking of pork someone commented that they didn’t know what to do with tenderloin, this is a link to a recipe I posted earlier this year (January 10) for Pork and Black Beans it is a favourite of ours.

Being a holiday we have had fireworks all weekend. I feel so sorry for all the animals, wild and domesticated, and birds too, which must be scared out of their wits.

The 4th of July will soon be here and I thought you might like a recipe for something other than the ubiquitous burger. 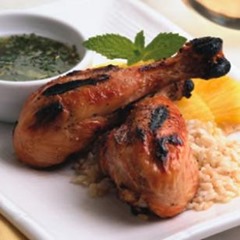 with brown rice and slices of fresh pineapple.