The other night Apollo 13 was on TV again. Matt decided to watch it and I watched it in snatches (I was reading) but then, finishing my

book I watched the remainder of the film. To me, this is the most incredible movie, we both remember when the Apollo 13 flight took place and we went through the events with the rest of the world in 1970, The film came out in 1995 and eventually we watched it, we knew what happened and how it ended and yet the movie had us sitting on the edges of our seats. I have seen the film at least three times and every time, I am caught up in the tension created by the movie particularly when the mission control room, and the world, are waiting for them to come back in contact, probably the longest 4 minutes ever. For a film to do this is pretty incredible. Tom Hanks played Jim Lovell, but one of the best characters in my book was Ed Harris playing Gene Kranz in the Control Room. They were all good, but for some reason he was my favourite. Maybe I should buy the DVD so I can watch it whenever I want – without ads. 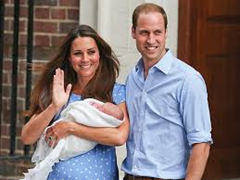 yesterday. William says he looks like Kate. It was a delightfully informal occasion and the pair of them looked so very happy. Apparently the prince has two nurseries, one in his maternal grandparents’ home and one in Kensington Palace. In fact he has everything except a name. I would imagine they have chosen a name in advance of the birth, but they sure aren’t telling anyone what it is. Kate is looking pretty good bearing in mind the ordeal she went through yesterday. American TV is certainly going nuts about the birth with special programmes, etc. I wonder how British TV is reacting. When you think of all the press camped outside the hospital and the palace, I guess they are reacting pretty much the same.

Today is the absolute end of our summer bowling season, we will be having a bite to eat (pizza for everyone but me) and maybe a couple of games, one bowling bingo. Their computers have bingo sheets on them, so I will be interested to see how that works. There will also be a couple of small prizes. In fact Matt and I and I believe others will be joining us, plan to bowl on Wednesday afternoons for the rest of the summer. We leave on Sept. 7 for the Carolinas of course.

If you haven’t seen me at your blog lately, I apologise, but life has been getting in the way lately.

Here’s a recipe for my Vegan friends which I found at Cooking.com it mentions Green Giant canned corn, only trouble with that, it’s delicious, but has a lot of sugar in it. If sugar is no problem to you that’s OK.

Contributed By: Judith, AZ
Easy-Peasy recipe to put together for a picnic or potluck. Keeps well in the fridge for at least 5 days. 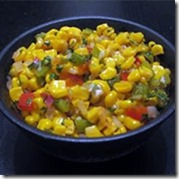 DIRECTIONS
In a med-sized non-stick frying pan, heat the wine and braise the corn and garlic on medium high heat until wine is totally evaporated. Toss in the bell pepper and onion and toss for 3 minutes. Remove and let cool.
Combine dressing ingredients and toss with corn and peppers. Best served at room temperature.
Keeps in fridge for several days.