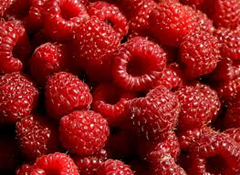 Didn’t make it to Costco after all yesterday, will have to be next week now. What did happen though, Tim Barrie said, on Facebook, that Mother Nature had been kind and he had asparagus to sell so off we trotted to get some. This time I got a lot and I am going to try freezing it. A friend did so last year and she was very pleased with it. Won’t have time today, bowling, but not doing anything tomorrow. I said to Tim had he ever sold asparagus as late in the season before and he assured me that he never had. I was hoping they would have some blueberries, they didn’t, but they had raspberries which I bought for our supper.

Today is virtually our last of our summer bowling league, we have a wrap up and maybe some pizza next week and that’s it although we will probably continue to bowl on Wednesdays and some of the 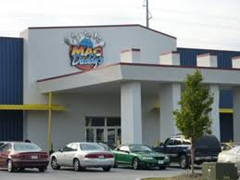 others may very well join us. The winter league starts early in September but of course, as usual, we will be in the Carolinas, 10-pin bowling too. In fact we are meeting up with Jeff Hargett from Strands of Pattern and his wife Myra for a bowling session one day.  We’re not very good at 10-pin so I hope Jeff and Myra are not too practised. We’re not very good at 5-pin come to that.

I thought the picture of this pasta looked delicious and then discovered it has potatoes in it. Not sure why you would want potatoes in a pasta dish, but it is apparently a traditional recipe. In case you don’t have any prepared pesto, I have provided a link. I keep some ready in my freezer.

Traditionally, this Italian pasta recipe combines pasta and pesto with 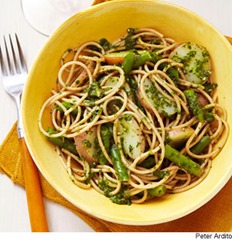 potatoes and green beans. In our recipe for Spaghetti Genovese we give pesto a nutritional boost by adding spinach and toss it all together with fiber-rich whole-wheat pasta for a warm, comforting weeknight meal. Serve with escarole and radicchio salad.