We didn’t go bowling. The alley called me to say that there was a

hydro (electricity) pole fallen and only being held up by the wires; it was behind the alley and so the cops had closed everything off and there was no power in the alley anyway. So, a no go, we are going to extend the season another week.

I was staggered to get an advertisement in my email for a thing called a Toas-Tite which is a gadget which has been in my family since 1956 and the Britain Can Make it Exhibition. Although I haven’t used it in quite a long time, I still have it together with another type I bought but which wasn’t nearly as good. It really is a marvellous little gadget and you can make the most wonderful toasted sandwiches with it.  We used to cook them over an open fire in campgrounds. I have also made them on stoves although they work best with gas fired stoves, I have made them on electric stoves too, although I once nearly started a fire. What you do is butter two pieces of bread and place them butter side out on the two halves of the gadget, then you put in a filling, a raw egg works wonderfully sprinkled with salt and pepper. You then close and lock the gadget which cuts off the crusts as you do that. You then cook it, turning regularly, and if you open it slightly and the sandwich is loose, it’s done. Deelicious. The ad was from Cooking.com and they were $30 each.

As you may remember, I bought (sorry Matt bought me) an android

tablet for my birthday in September. I have been obtaining various apps for it, but I am staggered at the amount of games there are, do people do nothing but play games? I do play solitaire now and again, but Google Play has hundreds (well a lot anyway) of games which one can install. I have a solitaire game, a hurricane and a couple of financial apps along with a Contacts app. I cannot imagine wanting any of these hundreds of games. Hm, looking for the picture I saw a Facebook App so got that. I just bought myself a portable router which I hope is going to help me get wifi on my android when I travel.

I love meringues and cream, add a few berries and such and you end up with something quite mouthwatering. This is a recipe from BBC Food so when they say double cream, they mean the really good stuff, here we would have to use whipping cream. I can’t say I have ever seen rose water in Canada, but I am sure one can buy it somewhere. 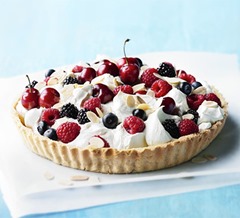 the shortcrust base- impressive but so simple