That train crash in Spain is pretty horrific. Have you seen the video of it actually crashing? You can see the train is speeding as it comes round the bend. I wonder if it was purpose or whether something happened. The thought of heart attacks comes to mind although these days they have dead man fail safes on trains I believe. At the moment the death toll is 78 with over 140 injured, some critically so they are expecting the death toll to increase. If you want to see the video of the crash, go HERE.

I just learned something new. Wednesday, at bowling, someone was talking about ground cherries and ground cherry pie. I had never 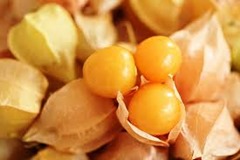 heard of them and they didn’t really know what they were. So of course I googled. It appears they are a husk tomato similar to tomatillos which I have never eaten anyway and a lot of people like to eat them straight off the bush but you can make a cream pie of the fruit. They are, in fact, slightly smaller than tomatillos and as far as I can tell, not the same colour. I just found a lovely sounding recipe for Ground Cherry Chutney at EatBoutique. Now I wonder if they sell Ground Cherries anywhere round here.

Look at this, it’s a genuine photo from National Geographic which at first I th 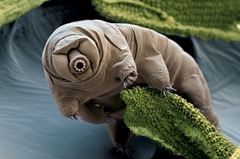 ought couldn’t be real.
Germany—A color-enhanced electron microscope photo reveals a half-millimeter-long tardigrade in moss. Called water bears, these eight-legged, alien-looking invertebrates can survive extreme pressure, radiation, and temperatures—and years without food. What a peculiar critter. Wikipedia says: Tardigrades are small, water-dwelling, segmented micro-animals with eight legs. Tardigrades are notable for being one of the most complex of all known polyextremophiles. Apparently they have recently found that these can survive in space. The are really weird but fascinating.

Just cruising the web and I came across the following recipe which is one we will try, probably tonight. For some reason we frequently eat fish on Fridays although we have never been Roman Catholics. We had some of our frozen mahi mahi the other day and found it pretty tasteless, so this would be even though the recipe calls for cod.

From EatingWell:  October/November 2005, The EatingWell Healthy in a Hurry Cookbook (2006)

The Mediterranean flavours of a warm tomato tapenade will brighten all kinds of white fish as well as chicken. Make It a Meal: Orzo and 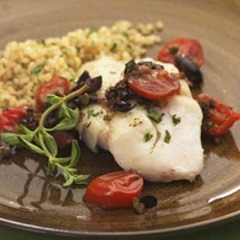 sautéed spinach will round out this meal.