I was flattered and delighted to be given the Super Blogger Award by Sir Jeff of Strands of Pattern who said some really nice things about me – what he didn’t mention was that I thoroughly enjoyed reading his book even though I did it twice and was delighted to be able to help a bit. It’s a damned good book and I am hoping it will get published in the near future. 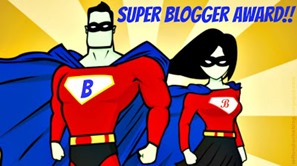 This award is the brainchild of another Super Blogger.  Mark Means from Left and Write created this award and discussed its (very few) rules here. The Cliffs Notes guide is--and I quote:


Take the award for yourself, then pass it along to someone who inspires you or you just think is 'super' in one way or another. Tell us why you think that person is super and deserving. Now, all the recipient has to do is reveal a (as in one) small secret about themselves (super people always tend to have a secret or two, right?) and pass the reward on to someone they think is deserving.

I hemmed and hawed about passing this on, there are so many good bloggers out there and it is great to be part of such a wonderful group, but I finally decided on Tina at Life is Good. I have enjoyed her blog for a while, particularly her new immigrant stories during the A to Z Blogfest, but I am currently full of admiration for her because of her medical problems and the way she is showing the world a brave face, in her writing and trying to keep her spirits up. She is fighting the good fight and I hope this Award helps her keep on the winning side of the battle. She is a very solid presence in the blogging world and helps to run the A to Z every year. You have my respect as well as my admiration Tina. I wish I had a photograph to use, but Tina doesn’t show one and I wouldn’t use one she recently posted of herself wearing a CPAP mask. We who have to wear them are not pretty sights.

Now, I suppose you want a secre

t. I don’t really have one, my life is very much an open book. Unlike Jeff, I was good at English, about the only thing I was good at, nor do I swear in traffic; much. I guess one thing which will horrify my North American friends, I don’t really like burgers, in fact I haven’t eaten one in a very, very long time. I don’t mind the meat patty part, but the pictures you see on TV of all the buns stuffed with everything but the kitchen sink turn me right off. If I have to eat in McDonald’s for some reason, I usually choose chicken. Now if you took the meat and served it with a delectable sauce, that’s a totally different ball game.

I found this recipe on Cooking.com and couldn’t resist it. I love Gravlax so I really will have to have a go at this. Maybe later in the year.

This gravlax is a play on the traditional Scandinavian recipe. Thinly slice the finished salmon for canapés or layer it on warm grilled flatbread with a scattering of sliced sweet red onions, fresh salmon caviar and a dollop of good sour cream or crème fraîche. This salmon is also delicious used to make those wonderful old-fashioned tea sandwiches with fresh herb butter and thinly sliced 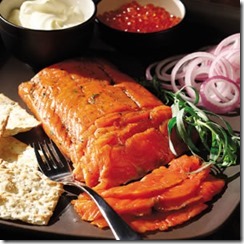 Make Ahead Tip: Cure for up to 3 days (Step 2). After curing and removing from the marinade, refrigerate the gravlax, wrapped in plastic, for up to 1 week. | Equipment: Cheesecloth

DIRECTIONS
Use cheesecloth to line a pan just large enough to hold salmon, making sure there is a 2-inch overhang. Lay salmon on the cheesecloth, skin-side down.
Combine salt, sugar, lemon zest and pepper in a small bowl. Sprinkle the salt mixture evenly over the salmon. Scatter herbs on top. Wrap the salmon tightly with the cheesecloth. Brush the top of the cheesecloth with tequila, making sure the cloth is evenly moist. Place another baking pan or large plate on top of the salmon (it should be big enough to cover the salmon but small enough to fit inside the larger pan). Place 2 heavy cans inside the smaller pan (or on the plate) to weight it down. Refrigerate for 2 to 3 days to cure.
To serve, gently wipe the salt mixture off the salmon. Slice the salmon very thinly at an angle, leaving the skin behind.