Monday night I ended up spending in hospital. Chest pains and high 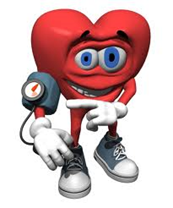 blood pressure. They sent Matt home. However, in the end they said I hadn’t had a heart attack. Only trouble is, on the way in, the ambulance paramedic had given me 5 sprays of nitroglycerine and some shots of morphine all of which made me feel much worse and later pushed my BP up even higher. When they came in and said I could go home, I assured them I couldn’t as I was feeling so lousy. The doctor finally decided it was because of the amount of nitro and morphine and having given me the same BP medication as I had at home, they sent me home. I spent the rest of the day in zombie like conditions and slept a lot of it away. I am typing this in between sleeps LOL.

I’m glad it didn’t happen last night, I wouldn’t have been up to bowling today which we are planning to do. I was so doped I didn't even post this properly.

Before this nonsense started, there was a programme on PBS which I didn’t write down the name of, but was all about making suitable maps during WWII for use on D-Day, not something I had ever thought about. It was very interesting. They needed comprehensive 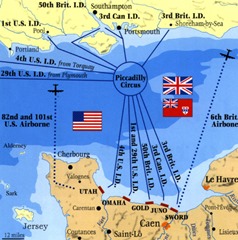 information about the Normandy coast so they could decide where to land and also know what defences were present and where. It was incredible the details required, but more incredible was the way these details were acquired. One guy managed to steal some blueprints from a German headquarters in Caen and pass them on to the French Resistance. This was a major triumph as it contained all the information about the wall being built in the area. The resistance themselves were being asked to find out certain information in their areas, they used pigeons for a while which were dropped in cannisters, but the Germans cottoned on and shot all the homing pigeons as well as releasing hawks. They had reconnaissance planes flying the coasts, although there were dummy planes too, a lot of the planes were shot down. The pilots who landed behind enemy lines wore silk scarves on which were printed maps of the area they were flying over. They even sent over divers to check the strength of the beaches for landing craft. It was an incredible operation. Millions of pictures were taken and masses of bits of information were threaded into one giant map in Churchill’s underground bunker. Who knew, I certainly didn’t. It took them two years to prepare the maps for the D-Day invasion. I am annoyed I don’t remember the name of the programme, but I was busy worrying about my health and didn’t think of it at the time. I would love to watch it again, maybe I will contact our local PBS station.

Wish I had come across this recipe during asparagus season, will have to make a note of it for next year. This is another recipe from the LCBO Food and Drink and I even left the wine recommendation in, the first time I came across Fat Bastard wine I had to buy it just because of the name, it is quite a pleasant French white wine.

Leaving the skin on the chicken helps keep it moist and succulent. Ask the butcher to keep the wing bone attached for an eleg 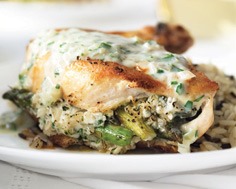 1. In a skillet, melt butter over medium heat. Add shallots and sauté until tender and translucent but not browned, about 6 minutes. Stir in garlic and asparagus and cook 2 minutes. Transfer to bowl and let cool. Mix in goat cheese, parsley, lemon zest, salt and pepper.
2. With knife held horizontally, slice through chicken breasts, starting at the thinner side, about two-thirds of the way through, so chicken breasts can open like a book. Spread one-quarter of the filling over the inside of each breast leaving a ½-inch (1-cm) border uncovered. Close each breast to enclose filling, securing with a toothpick if desired.
3. Heat oven to 400°F (200°C).
4. In a large ovenproof nonstick skillet, heat oil over medium-high heat. Sprinkle the chicken breasts with half of the salt and pepper. Arrange chicken, skin-side down, and cook until golden brown, about 3 minutes. Gently turn chicken over and cook 3 minutes more.
5. Transfer skillet to oven and bake until chicken is cooked through, about 15 to 20 minutes. Transfer chicken to a platter to keep warm.
6. In same skillet, melt butter over medium/high heat. Add shallots and cook until tender but not browned, about 6 minutes. Stir in wine and chicken broth. Bring to a boil. Reduce heat to maintain a simmer for 3 minutes. Whisk yolks and remaining salt and pepper in a small bowl. Pour about ¼ cup (50 mL) of the sauce into the yolks and whisk to combine. Whisk yolk mixture back into skillet and continue whisking, without letting it boil, until sauce is thick enough to coat the back of a spoon, about 3 minutes. Stir in parsley and tarragon and serve over chicken.

WHAT TO SERVE
FAT BASTARD CHARDONNAY