Today is our first day of Monday Senior’s League bowling after the holidays, I hope I do as well as on Friday.

Sunday it snowed on an off all day. Enough to cover the snow already in place, but not enough to cover the bare roads and driveways which will please the homeowners and drivers. People actually have the nerve to walk on the snow in the park and spoil its pristine beauty, how dare they!! Actually I would think it would be quite difficult to walk in the snow at the moment. Dogs don’t have a problem, but humans do as it is several inches deep. 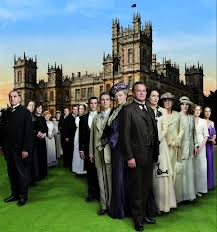 Downton Abbey begins its third season on Sunday night. At the time of writing I haven’t watched it but some of the cast were interviewed on Good Morning America so I do know that his Lordship loses all his money which makes me assume that the reason her Ladyship’s mom, played by Shirley MacLaine, comes into the picture is that she has been asked to rescue the Crawley family financially. After all that’s why his Lordship took an American wife in the first place although they apparently fell in love at some point way before the series started; except in season 2 he was open to a bit of an affair with one of the maids. When I saw them being interviewed, I had no trouble recognising the men but the women looked so different from their parts I would never have realised if they hadn’t posted a picture of each character as they were interviewed.

Came across an article about Gérard Dépardieu, the French actor, who has now 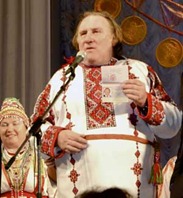 been granted Russian citizenship – he has left France because of the proposed tax on millionaires amounting to 75% of their income. I don’t blame him, I would have skedaddled too. I personally don’t believe in taxing the rich disproportionately just because they have more money. Where is the incentive to achieve if all you are going to end up with is huge taxes. The rich will always be in a position to “bugger off” if necessary. In Russia there is a flat rate tax of 13%. In the picture he is holding up his new passport and is dressed in local costume.

There used to be a café in Emerald Isle, NC, which served custard ice cream, which I loved, and a seven layer chocolate cake, which I also loved. Always had trouble deciding which one to choose. Sadly they closed down a few years ago. The following recipe makes me think of their cake.

With a typically American love of exaggeration, any multilayered cake might be 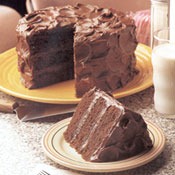 dubbed "mile-high." But watch the expressions when this towering cake is presented, and the name will seem perfectly fitting. Rich and crumbly on the inside and covered with dense frosting, it's a chocolate lover's delight.
INGREDIENTS

FOR CAKE: In a bowl, mix together the flour, baking soda, salt and baking powder. Set aside. In the top pan of a double boiler or a heatproof bowl set over (not touching) simmering water in a pan, melt the chocolate, stirring until smooth. Remove from the heat and let cool to room temperature.

In a large bowl, using an electric mixer set on medium speed, beat together the butter and sugar until light and fluffy, 3-5 minutes. Add the eggs, one at a time, beating well after each addition. Then add the cooled chocolate and the vanilla and mix until blended. Reduce the speed to low and beat in the flour mixture in three batches, alternating with the milk and beginning and ending with the flour.

Divide the batter evenly among the prepared pans. Tap them on a countertop to rid the batter of any air pockets. Bake until a toothpick inserted into the center of each cake comes out clean, 25-30 minutes. Transfer to racks and let cool in the pans for 15 minutes, then invert the cakes onto the racks to cool completely.

FOR FROSTING: In a heavy saucepan over high heat, bring the cream to a boil. Remove from the heat and add the chocolate, butter and vanilla, stirring constantly until both the chocolate and butter are melted and the mixture is smooth. Place the pan in the refrigerator and stir every 15 minutes. The frosting will begin to set after about 50 minutes and will be quite thick. Check every 5 minutes near this point for a spreadable consistency. (If the frosting becomes too thick, let stand at room temperature, stirring occasionally, until it softens to a spreadable consistency.)