ell that was dumb of me, I took part in a blogfest yesterday, but the link I had left on the sign up page didn’t work, I goofed. Oh well, in a couple of days, on the 30th, I can sign up for the A to Z Challenge for this year. That is writing in April using a different letter of the alphabet every day except Sundays. I took part last year and I selected a recipe every day beginning with the appropriate letter. It was fun to do and it helped to increase some of my following. It was also fun meeting other bloggers and reading what they said in their challenges. It was much easier for me than for some as I blog every day but Sunday anyway.

We also went to our usual bowling, we had had so much snow the previous night that a lot of people didn’t make it, for one reason or another, so as there were only the two of us on our team, we paired up with a couple of other players. None of us bowled well for some reason, but I did have a 200 game at the end, not sure how that happened. I noticed there were three scores posted on a board for this season one at 408 and two at 410. A perfect game in 5 pin is 450 or 12 strikes in a row. If you want to know more about 5 pin this is a link to a Wikipedia article. I have never bowled that high a score although Matt has, some while back; let’s face it I was thrilled to bits to bowl 314 a couple of years ago. 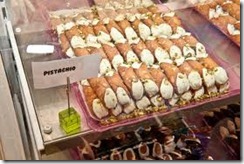 Saturday, I ended up deciding to cheat and have bought some Cannoli instead. Standing cooking for a long time is not so easy for me any more and I love Cannoli anyway. I got them at our favourite store, Vincenzo’s and they assured me they were good for Saturday. I also bought a jar of roasted peppers for my antipasto.

If you want to try your hand at making cannoli, here is a recipe for you. If you have a good bakery nearby I think its easier to buy them.

True Sicilian cannoli are made using fresh sheep's-milk ricotta. We've substituted a combination of fresh cow's-milk ricotta and goat cheese. If you don't like goat cheese, use additional ricotta instead.

Make dough for shells:
Whisk together flour, sugar, cocoa, cinnamon, salt, and baking soda. Add 2 tablespoons lard and blend in with your fingertips until combined. Add wine and yolk and stir until a dough forms.

Turn out dough onto a lightly floured surface and knead until smooth and elastic, 5 to 7 minutes. Form dough into a disk and wrap tightly in plastic wrap, then let stand at room temperature 1 hour.

Make filling while dough stands:
Beat together ricotta, goat cheese, confectioners sugar, orange peel, orange-flower water, and cinnamon in a bowl with an electric mixer at medium speed 1 minute (do not overbeat). Fold in nuts and chocolate until combined and chill.

Heat remaining lard with 1 1/4 inches oil in a 4-quart heavy pot over moderate heat until it registers 350°F on thermometer.

Fry dough on tubes 1 at a time, turning with metal tongs, until 1 shade darker, about 45 seconds. Wearing oven mitts, clamp end of hot tubes, 1 at a time, with tongs and, holding tube vertically, allow shell to slide off tube onto paper towels, gently shaking tube and wiggling shell as needed to loosen. (If you allow shell to cool it will stick to tube and shatter when you try to remove it.) Transfer shells to paper towels to drain and cool tubes before reusing. Wrap remaining dough around tubes and fry in same manner.

Spoon filling into pastry bag and pipe some into 1 end of a cannoli shell, filling shell halfway, then pipe into other end. Repeat with remaining shells.

Cooks' notes: •Dough can be made 1 day before frying shells and chilled. Let dough stand at room temperature 1 hour before rolling.
•Shells can be fried 2 days ahead and cooled completely, then kept, layered between paper towels, in an airtight container at room temperature.