Well, its all over, the festivities, the overeating and the celebrations. In fact we don’t take down our

decorations til 12th Night or Epiphany. It was a tradition we followed in the UK, not sure if anyone still does it, and I feel deep down it is unlucky if I take them down before then. Just thought, Shakespeare wrote a play called Twelfth Night or What You Will. I don’t remember any references to Christmas decorations though. Of course they didn’t have Christmas Trees in his day, that was started by the Germans somewhat later. Our tree is smothered in Candy Canes and we end up with more every year as they are handed out at the bowling alley. When we take the tree down they all go into a bag and then into the freezer for next year.

Matt had an appointment with the dermatologist yesterday. When we got there, I 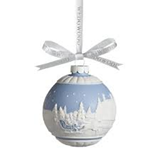 have never, but never, seen so many Christmas Trees. Everywhere you turned was another tree. What fascinated m 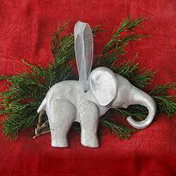 e, one of the ones in his treatment room was decorated with all kinds of elephant ornaments. Never seen that before. Another one in the waiting room where there were at least a couple of trees, was principally balls that looked like Wedgewood pieces, Wedgewood blue with white. Matt thought they were wrong for Christmas, I thought they looked great. They weren’t Wedgewood you understand, but they looked like they could have been. I wouldn’t mind a few of these myself. I was a bit surprised they still had the decorations up, I thought I was about the only one who hadn’t taken them down. 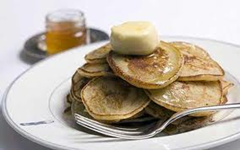 I have mentioned before, underneath the dermatologists office is a Scottish Bakery so I popped in and got us some Cornish Pasties for supper. Delicious. I have two in the freezer for a later date as well. I bought some Welsh pancakes for me too, Matt isn’t keen on them. Used to have a member of staff at the yacht club my parents ran who made them for me all the time as a kid, they were great. In the picture they look very much like the pancakes made in North America for breakfast, but they weren’t quite the same. Not sure what the difference is, but they don’t taste the same at all. I don’t have honey or syrup on them, just spread them with butter like a slice of bread, yum.

I used to do a recipe called Moroccan Chicken which had orange juice in it, this put me in mind of it although not really similar. This one sounds flavourful and was recommended by a friend in Ireland who has just cooked it.

You don't need a clay pot to whip up a fragrant, North Africa tagine - throw it all in a 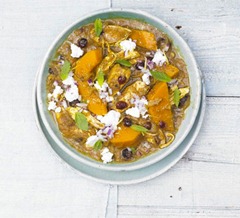 casserole dish and top with feta, mint and lemon