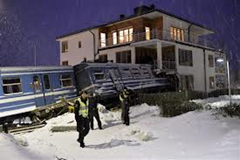 Here’s an odd story, a cleaner in Sweden stole a train and drove it 1.6 Kms before crashing it into an apartment block. She was the only person hurt. They have no apparent motive – I guess she just fancied trying to drive one, they say at the end of the article that its not that difficult but can’t understand how she got the keys to the train.

Tuesday, we didn’t do a darned thing – Matt was looking after his eye which is improving somewhat although he looks as though someone socked him. He has to take it fairly easy for about a week to be sure it doesn’t start bleeding or anything. His eye was pouring in the morning, worse than before he had the operation, however, that slowed down considerably by the afternoon.

Friends phoned to ask us to go with them to the Legion on Sunday for rolled ribs. We said yes, so she got us some tickets. Then I remembered Sunday evening is Downton Abbey, wail, now what do I do. We do have a VCR recorder, but I haven’t used it in so long I have totally forgotten how to. Will have to get out the book of words. I think I still have a blank cassette. I don’t think its re-run anywhere.

This is a take on Chicken Cordon Bleu. 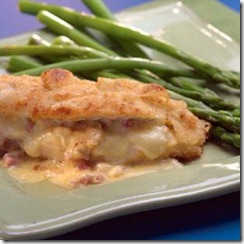 Making a pocket in the chicken breast to hold the stuffing is easy with a good, sharp, thin-bladed knife. Browning the chicken in a skillet before baking gives it a beautiful golden color, and finishing in the oven ensures that it cooks evenly throughout.