What a lovely start to our day, no hot water. I phoned the super at 6:45 a.m. and he didn’t know anything about it, luckily the hot water came back on again around 8 a.m. We were picked up at 9 a.m. by one of our friends.

So, we headed off for Niagara-on-the-Lake which is a delightful little town near Niagara Falls. As it turned 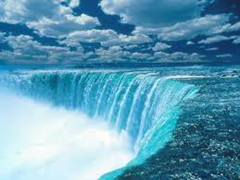 out we were in the area somewhat early (my fault I was worried about lunch times etc.) and we drove along by the Falls, both the Horseshoe and the American ones – pretty fantastic sight at any time of the year. I always have been very impressed, though, with the rough water before you actually get to the Falls themselves.

We drove along the Niagara Parkway and stopped at a Walker’s Country Market. We sampled

lots of items including a jam made with Peach and Jalapeño which was delicious. I ended up buying three miniature jams, Cranberry Marmalade, Garlic Jelly with Hot Red Peppers and Hot 4 Pepper Jelly (for Jelly read preserve or jam). We drove past several wineries and ended up at The Olde Angel Inn http://www.angel-inn.com/ in NOTL. We expected everyone else to be there but they arrived after us. Interesting spot, devoted to being as English as possible so of course their menu included Cottage Pie, Steak and Kidney Pudding, Fish and Chips, etc. etc. The others arrived shortly after and I was thrilled to meet our friends from South Africa. Pictures just aren’t the same. This, of course, was the object of the whole exercise and it was wonderful to meet someone I have been talking to for years. In fact we did talk on Skype once.

Having had a good, if somewhat expensive lunch, Matt had a Caesar Salad, I had a Portobello Burger

with a very nice glass of house wine; we walked (well I staggered) to Cows, an ice cream shop which sold a lot of other touristy stuff too. Only two of us (I was one) had an ice cream though. From there we went to The Ice House where we tried their ice wines which have been big winners in Europe. Interesting we tried a white one (Gold Vidal) first, had a sip, and then were g

iven a very spicy pea to eat and were then told to sip the wine again. What a difference. Then we had a red ice wine (Grand Gold Cabernet Sauvignon) I didn’t know there was such a thing as a red ice wine; same thing with the tasting, but this time we were given a chocolate covered coffee bean. A couple of our friends bought ice wines, we like them in moderation, but not enough to actually purchase a bottle. We did chat to one of the wine makers who explained the difference between Canadian ice wines and American ice wines. In Canada the grapes are frozen on the vine and allowed to thaw and refreeze at least three times before being picked. California doesn’t have the same winter so they squeeze their grapes and then freeze the resulting juice. It is a fact that Canadian ice wine makers are winning lots of prizes all over the world.

Next on the list was Coyote Run where, neither Matt and I nor our South African friends liked the tastings we tried. Our chauffeurs were being very cautious at 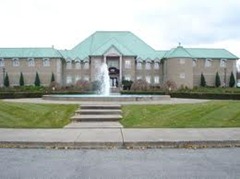 what they tried in order to stay legal. From there we headed towards another winery but passed Chateau des Charmes which I wanted to visit as we know their wines already. Matt and I ended up buying a couple of them, a 2009 Sauvignon Blanc and a 2007 Cabernet Sauvignon. I was unaware before that the family originated in France. From the look of the residence across from the winery, they are doing very nicely.

Travelling quite a distance we ended up at Stoney Ridge Winery having journeyed through a downtown area and crossed the Welland Canal. Very scenic – I don’t think. Still the gardens at this winery were very beautiful with peonies all over the place. One of the feat

ures of Stoney Ridge is their cheese tasting bar. There were lots of very unusual cheeses to try and Matt and I ended up with some blue cheese and some very good brie. I cannot, for the life of me, remember what the blue cheese was called. Absolutely delicious both of them. We also bought a bottle of their wine an unoaked Charlotte’s Chardonnay.

Finally ended up at Flat Rock which was where we 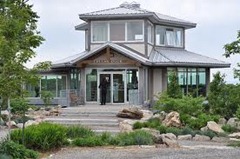 were going to have supper, from a wagon! el Gastrónomo Vagabundo. In good weather you can sit at outside tables to eat, however, by this time it was quite chilly, so we went up to their dining area which had the most gorgeous views of the surrounding countryside. The food was delicious, in particular the green papaya salad. http://www.elgastro.com/ We had one glass of wine with that meal but were unable to do any tasting there as we discovered that they close tasting bars at 6 p.m. by law we were told. Sadly we then parted and went our separate ways. Our South African friends are off to New York City today.

At one point during the afternoon, we exchan

ged gifts and I was delighted to receive a serving spoon and a bookmark made of South African beading. You know I will put the bookmark to really good  use. I am not sure if you can see, but the spoon handle is also beaded. Most attractive items. I might say, by the end of the day, my legs were killing me, in particular my feet, and yet I didn’t do a lot of walking. I did get to climb more stairs than I like though! Oh for next week when hopefully my mobility will improve.

I would like to have had the recipe for the salad I had for supper last night, however I don’t, so here is a frittata instead. This recipe is for eight but can easily be sized for lesser numbers. We make frittatas a lot and always enjoy them. As for the pan recommended, we use a regular non-stick pan and wrap the handle with foil to protect it in the oven.

By The Sprouted Kitchen
WebMD Recipe from Foodily.com

Herb frittatas filled with fragrant chives and dill and parsley and enriched by a touch of fresh cream, are as nutrient-dense as they are flavorful and make for a simple, but decidedly fresh breakfast or lunch. Make this dish in summertime, when both fresh herbs and pasture-raised eggs are in full production, easily accessible and inexpensive.

While the butter is melting, crack one dozen eggs and whisk them vigorously to incorporate a bit of air.

Once the eggs are sufficiently beaten, smooth and creamy with no separation of white and yolk, whisk in three tablespoons cream and minced herbs.

Pour the mixture of eggs, cream, and herbs into the melted fat in the hot skillet.

Allow the egg, herb, and cream mixture to cook over a medium or medium-low flame for about five to six minutes, or until the mixture firms up.

Once the mixture is thick and firm, but for a bit of uncooked egg on the top of the frittata, place it in your oven under the broiler for four to six minutes.

Remove from the oven, either plating the frittata or serving it directly in the skillet.