something else. They frequently advertise medications for various ailments, quite often depression, but not exclusively. When you hear them detail all the side effects possible, it makes me wonder who on  earth would ever take such medications, sounds like you are opening yourself up to far more problems than from the original one, not excluding death in some cases. I won’t name any names, but if my doc ever needed to give me these things, I am not sure I would consent to take them. I would have to be really ill I guess.

Dreadful story about a cop being killed by a 15 yr. old driver this week. The cop had pulled the kid over and was at the driver’s door when the vehicle suddenly accelerated. Apparently the kid too is in hospital with serious injuries which may leave him paralysed. Read the article here http://tinyurl.com/4yg7ld3 He has been charged with 1st degree murder. This makes me wonder, who is actually at fault, the youngster or the parents? I know I had an uncle who used to break into the my grandfather’s garage and steal the car when he was under age. He was a thorough tearaway until he was drafted into the RAF to do his national service and became a different man. Maybe that’s what’s wrong with youngsters, they need the discipline of the draft or national service to straighten them out.

This morning GMA revealed the video of the youngster they decided to make into a pop star in one week. Her name is Lexie St. George and much to my surprise, I actually quite enjoyed the video. Matt said it was monotonous and in one way he was right, but I still enjoyed the video. http://youtu.be/WWAdi6GYGdA see what you think.

Today Mr. & Mrs. Wales land in Canada and help us to celebrate Canada Day tomorrow. Apparently some of the younger generation couldn’t care less and I even saw a report that there is some resentment against them and yet they report that they are such a charming couple.

This recipe appealed to me when I saw it on Recipe du Jour the other day. 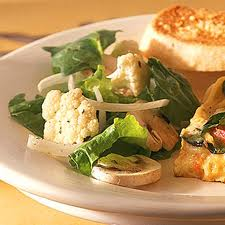 Combine the first 6 ingredients in a large bowl. Combine lemon juice and next 5 ingredients (lemon juice through pepper) in a bowl, and stir well. Pour over spinach mixture, and toss gently to coat. Makes 4
servings.