on all four paws – he was abandoned in Nebraska. He is now being featured as the bionic dog as he has prosthetic paws on all four feet. A veterinary assistant found him and raised enough money for two back paws and the company that made those prosthetics decided to give him the two front paws. He now runs, jumps and swims with the best of them. There is a video here http://tinyurl.com/5ukg63h

I am still having to elevate my leg although it is so much better today I am pleased to report. However having the laptop on my knees like this is a tad uncomfortable to put it mildly. Even last night, had to rearrange the furniture so I could watch TV – I normally don’t sit in front of it unless there is something I want to watch. After my usual stint of Jeopardy which I always hate to miss, I later watched a smash ‘em and bash ‘em movie – Bruce Willis in Die Hard With a Vengeance. Its a fun film but Matt got tired of it so went to play Bookworm.

I just finished a book called Legacies by Mercedes Lackey. I t

hink it is classified as young adult. Not a bad story and the beginning of a series apparently. Book 2 is not out til July I think. I enjoy most of what Mercedes Lackey writes but not her stories about medieval Mediterranean lands, the Heirs of Alexander series. I love her Valdemar books and could read them forever. I am currently reading A Trio of Sorcery which is a collection of three Diane Tregarde stories I am not sure if I have read any of these before. I have two more of her books to read yet.

Wraps are so popular these days I thought I would include one here. 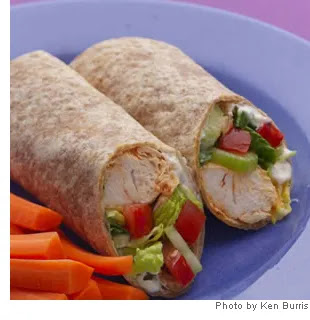 Moms and Dads like wraps because they’re neat and compact--so beware: ours is messy and spicy. This fiery combination of buffalo chicken in a modern wrap is guaranteed to drip. Get out the big napkins and have a ball!