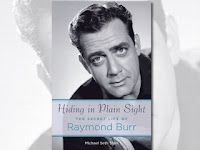 I don't actually sit down to watch Good Morning America in the mornings, but it is on, so of course it attracts my notice. This morning I learned that a book has been written about Raymond Burr of Perry Mason fame called Hiding in Plain Sight. Apparently he told the world he had two wives who died and a son who also died. I believe there was something about a military career too - it all turns out to be false and he was gay. I guess at the time he was famous, being gay was not a good thing to admit so he invented a fictional biography for himself; if you want to read more click here, there is also an excerpt from the book. I remember when we first discovered Rock Hudson was gay, it was quite a shock as we had all regarded him as such a "hunk" in his day.

Another thing on GMA this morning, they were having a clambake. The weatherman, Sam

Champion, was at a beach where they were grilling seafood. Sorry, a genuine clambake should be cooked in the sand with lots of seaweed packed around it. They actually had what I would call a pig cooker which to my mind spoiled the whole idea of a clambake. They were serving lobsters, clams, chicken and corn to name a few things. However, even I, with my love of lobster, didn't really fancy it at breakfast time. Maybe if I had been up long enough and was down at the beach, I might have changed my mind. The best demonstration of a clambake was in the movie Carousel, but as that is a very old movie, not many people will have seen it these days. I have a friend in North Carolina who used to do a clambake for us, hers was in a special cooker which steamed everything. Never did have lobsters, but we certainly had clams, shrimp, corn, chicken and potatoes which were all delicious. That was one of the beauties of living at the coast in NC, you could walk into the water almost anywhere and get yourself enough clams for supper. We used to borrow pig cookers like the one

in the picture and have a party with a whole cooked pig which took quite a few hours to cook. I am not sure why that necessitated drinking beer as well, but it always did. We never shredded our pork, but that is the traditional way to do it and is what is referred to as barbecue in restaurants. We much preferred to carve lumps of meat off the pig. I used to make up a barbecue baste, the recipe was given to me by a friend who actually owned one of the cookers we borrowed. It was made with a lot of bottles of other sauces, but it tasted pretty fabulous and could be used as a sauce once the meat was

done. Usually a friend would help with the barbecue and this picture shows his hat decorating the pig. Matt got so good at cooking pigs, he was asked to do it for company parties and weddings, etc. and our friend would often go with him. If the pig was big enough, they sometimes had to cook it all night. For our own parties, everyone else would bring a dish of food and once when #1 daughter's family visited, her husband was absolutely stunned at the amount of food available. Mind you, we thought he would never stop eating. Unfortunately when #2 daughter visited with her family, her husband, Mike the wildlife artist (see link on this page), was too sick to enjoy much of it at all. We had one wow of a Pig pickin', as they were called, for my 60th birthday and all had a fabulous time.

You can guarantee someone would always make a Pig Pickin's Cake. This too was made with pre prepared foods, but it was delicious. We got the recipe from a local paper, The Tideland News, I don't think they publish it any more. I don't generally publish recipes which are not made from scratch, but this really does work out well.

Preheat oven to 350 F. Grease and flour three 9 in cake pans. Combine cake mix, eggs and oil and blend with mixer for two mins at medium speed. Add can of orange slices, including the juice, and beat one minute at medium speed. Evenly distribute mixture in cake pans and bake for 15 - 20 mins. Test for doneness with toothpick. Cool completely before icing. Mix pineapple and vanilla pudding with spoon to blend well. Fold in Cool Whip and stir until blended. Spread icing between layers, on top and sides. Refrigerate til ready to serve.

I have just added a new blog link, Fresh Approach to Cooking. There are some great recipes, check them out.

Have a great Memorial Day
Posted by Jo at 8:58 AM