I want to remind you about my friend who is a survivor of breast cancer, and is taking part, once again, in the Susan G. Komen Race for the Cure on Mother's Day. This is her website and hopefully you will be able to make a donation to help the cause. I know she would be very appreciative as would, obviously, the Susan G. Komen organisation. 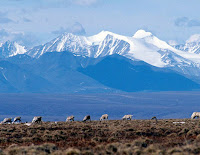 Today's Seven Wonders of America showed us the Arctic National Wildlife Refuge in Alaska which is approximately the size of South Carolina. If you want to see a series of wonderful pictures click here and then scroll down to Seven Wonders of America. Apparently there are thousands of barrels of oil under the area but so far, they have not been touched although the oil companies say they won't damage the area. Apparently an

instance was quoted where, in Alberta, Canada, 500 birds, mostly ducks, were killed because they landed in a tailings pond. The pond lacked gunshot-sounding noise-makers to deter wildlife required under provincial rules between spring and fall. To see birds mired in oil and unable to survive is one of the saddest sights I can imagine. I wonder why they can't clean up these ponds anyway. I really hope Alaska can keep the oil companies out of their Reserve. 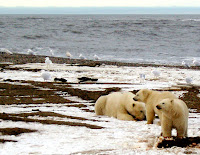 There are pictures of Caribou, Polar Bears and Musk Ox all of which live in the area together with Black Bears and Arctic Foxes and I am certain many other species. Polar Bears are very much endangered anyway because of the melting of the ice. It would be so sad to lose such a wonderful animal. I am a big supporter of the World Wildlife Fund who are doing all they can to save the animals and habitats of the world but they can do little without our help.

We had our last bowling for the winter league yesterday, it was fun. We played bowling bingo, never done that before. You get a sheet with various things like strikes, spares, 3, 10, 13 and so on and your team has to bowl all these and cross them off the sheet just as you would in normal bingo. It was all done as quickly as possible but I'm afraid my team didn't win. We did a couple of others types of bowling too. Later to kill time whilst the caterers were setting up names were drawn and each person called had to do something, I got bowling with my other hand, I kind of froze, I couldn't seem to think how to step forward with the ball in the wrong hand. I ended up with a gutter ball. Prizes were given out for the year and much to my surprise Matt and I got most improved bowler in our teams. We got $5 a piece for that. We then had our banquet and after headed home. When we got home I immediately phone the alley and said we had decided to join the summer league. It only goes from May 12 to July 14 with another banquet on the 21st. No bowling at all in August.

As it was so early for us to eat, I had to have a snack again later as it would have been too many hours to breakfast time for my diabetes. I ended up having tomato toasts which is one of my favourites.

1 or 2 slices bread,
a clove of garlic
a tsp olive oil per bread slice
a ripe tomato, thinly sliced
Salt and Pepper

Toast the bread and while still hot rub the garlic all over the toast really well. Then spread the toast with a little olive oil. Layer slices of tomato on it and season to taste. Eat and enjoy.

If you wish you can add slices of the cheese of your choice and broil the whole until the cheese melts for another taste sensation, I prefer Havarti for this, but any melting cheese would be good.