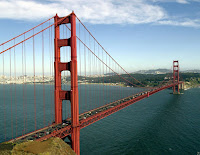 Today it was the Golden Gate Bridge in San Francisco. I have actually been there and driven across it. I had been told that the painters finished painting the bridge and then started again at the other end, they definitely said that wasn't so when they were being interviewed. They paint the bits that need it with Industrial Orange. There were some very interesting facts on its construction and the part of the bay where it was built. Apparently there is a 375 ft. trench where the water sweeps into the sea. Read here and see all the pictures shown on the GMA site, the facts are absolutely fascinating. During construction they had a safety net which saved the lives of 19 people who became members of the Halfway to Hell Club. Unfortunately 11 others 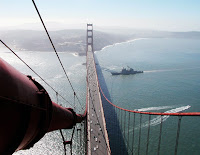 died. The bridge was built during the depression so hundreds of workers wanted to work on it because, of course, jobs were so hard to come by at the time. The bridge is considered a marvel of engineering, particularly for the time in which it was built. Remember they didn't have computers to help them; it spans a mile of San Francisco Bay which is a beautiful spot to visit anyway. I crossed the bridge being driven by my cousin who lives in Marin county on one side of the bay. I was in San Francisco on a conference at the time.

The city is pretty fantastic anyway, with the cable cars and the waterfront shops and piers. If you can't find what you want to eat there, you are very difficult to please. I never got to drive down Lombard Street although I did see it from the bottom but I did visit Alcatraz which, I was horrified to discover when I got there, is an 8 storey climb from the dock up to the prison. I made it, there are seats strategically placed up the hill. Phew what a climb. I found it a very interesting place and as I had the cassette tape playing in my ear telling me all about the riots and escapes, it became even more fascinating. In the harbour of San Francisco there are sea lions all over the place which the residents consider to be a damned nuisance, but which are fun for tourists to see. I was there for a week and would go back in a New York minute if I could.

The news from China gets worse and worse. The latest figures on my home page say 12,000. Every time I check it increases. At least there are hundreds of Chinese soldiers in the area doing

rescue work which is more than can be said for Myanmar (Burma) where the ruling junta are still misappropriating the supplies while their people die horrifying deaths from starvation and disease. That is today. I wonder how many people are still supporting the tsunami disaster relief efforts - I see it is now being called the Great Sumatra-Andaman earthquake, unbelievably it is almost 4 years ago since it happened. That is a pretty horrifying picture I just found. Those people are about to be inundated.

I hope those of you who celebrated Mother's Day on Sunday had a good one. I am only a step-mother so don't get counted. I felt sorry for a friend of ours who's mother just died and the visitation was on Sunday, makes it particularly poignant. At least she was 98 so had a good long life.

Well, back to asparagus, here is one I got from Food TV.