Just watched a movie called Treed Murray - didn't think it would be very good, but actually it wasn't bad. I didn't know anyone in it (I am not very up on actors anyway) but we both enjoyed it. Its about an ad executive who takes refuge in a tree from a bunch of muggers. The muggers decide to wait out the night until the guy, Murray, comes down from the tree. If you get a chance, watch it.

Earlier we watched one of our favourite TV shows, Wingfield. Rod Beattie plays the part of a 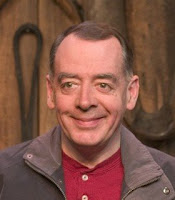 stockbroker who has semi retired and bought a farm in Persephone Township, Ontario. He plays every part. When we first saw it, we weren't impressed, but then it caught our interest and it is actually brilliant acting. If you don't live here you probably won't get a chance to see it, but it is so clever. He doesn't change in any way except in actions and expressions, but you know just who the characters are. In previous episodes we have seen, his wife was pregnant and the way she got up from a squat, with hands on her back, you could just see it as a pregnant woman, but it wasn't it was Beattie. Really clever. I am glad it is starting over because I really want to

see how it all began. I recently recommended it to someone who lives in our building. I recommended another show to her which she has been enjoying, As Time Goes By. Its an English comedy which is extremely popular in North America and is shown on Public Television. I have no idea how many re-runs it is into, but we watch them faithfully every Monday night. Judy Dench is the most well know name, but the cast is excellent - even the bit parts are beautifully acted and the people were wonderfully cast. If this show is on TV where you live, I can recommend it. Now it is very old, but it is still one of the funniest shows we have ever seen. We are not alone, every year it is voted in as the top BritCom on the station.

I enjoyed some stewed rhubarb for supper tonight, made with Splenda again and have some left for tomorrow. I am not allowed to have breakfast before my CT Scan other than something light (diabetics have to eat regularly). I am taking a snack bar, but will probably be very hungry by lunchtime.

I am looking forward to starting a new book tomorrow as I have just finished The River God by Wilbur Smith which I enjoyed very much. The next book is Victory Conditions by Elizabeth Moon, part of her Vatta's War series.

Here is another way to use asparagus. This came from an ezine I get each day called Recipe du Jour. I haven't yet tried it, but saved it because I thought it sounded pretty good. Most of the recipes I give here are ones for dishes we have eaten, but sometimes they are for things I certainly intend to eat.

1. Bring water and salt to rolling boil in large pot. Trim ends from
asparagus and cut into 1-inch pieces. Add asparagus to boiling water and cook until tender but firm, 1 to 4 minutes, depending on thickness. Scoop out the asparagus from the pot with a sieve and rinse under cold water to stop the cooking and preserve the bright-green color. Return the cooking liquid to rolling boil. Add fresh fettuccine and cook until tender but firm.