Books I Have Enjoyed Lately

I just finished reading four stories of The Lost Continent by Catherine Asaro. They were eBooks so I was reading them on my Palm Zire. Fire Opal was the last of the four. I really enjoyed them, so I went hunting on the net to see if she had written any more, she has, so I will have to do something about getting hold of them. I have been reading Catherine Asaro books for a while now, her 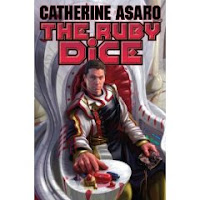 Skolian Empire series is great, I know I have mentioned them before - I don't own any of the books in the series, but I think I should change that. Catherine Asaro herself is a scientist which always helps with science fiction I think. Isaac Asimov who, in my opinion, was one of the greatest sci fi writers of all time, was a scientist. At one time I owned everything he had written, but having carted a couple of thousand books from England to Canada, then from Canada to the States, I finally decided to thin down my library considerably before we moved back to Canada. It was a very hard decision for me but I figure if I want to re-read a lot of the books I got rid of, I have a very good library service available to me here.

Talking of the library, they have a book ready for me right now which we will pick up later today, it is The River God by Wilbur Smith. Not a new book by any manner of means. It is about ancient Egypt and I have a sneaking suspicion I might have read it years ago, but when a friend mentioned she had just read it I thought I would get hold of it. I have always been fascinated by Ancient Egypt and have certainly read a lot of stories, both fact and fiction, about the area. It might be long enough ago that even if this book has crossed my path in the past, it still may seem pretty fresh to me today.

The creation of this blog was severely interrupted by a Skype call from daughter #2 and family. Do you use Skype? Its a great programme which allows us to make calls to England (and anywhere else) with our vid cam on at both ends so we can see everyone whilst talking to them, also totally free. I occasionally talk to my cousin in Portugal on Skype as well. Our son-in-law (Mike of the wildlife art - see the link on this page) reads my blog so they were all teasing me about my love of asparagus and were horrified to hear I had only one serving left. We got progress reports on all the grandkids who are apparently doing extremely well in all their endeavours. Two are intending to teach and our 12 year old granddaughter seems to be headed for a theatrical career although she says she wants to be a veterinarian. We shall see.

OK, not asparagus or lobster or rhubarb today. I love omelettes too.