This weekend is a holiday for Americans, last week it was a holiday for Canadians. For us it was Victoria Day which is often referred to as May 24th weekend which puzzles me as it is the 24th today so why wasn't it celebrated this weekend I wonder? For the Americans it is Memorial Day and a time when many of them remember those passed away in their families as well as members of the armed services killed in wars. Many people also

spend their weekend at the barbecue and there have been all kinds of programmes noting that fact in the last week or so. Unfortunately, living in an apartment, we are not allowed to have a barbecue so make do with an indoor/outdoor grill which works very well. In fact friends of ours, who also live in an apartment, have an electric grill on their balcony which they like very much. We have thought of getting one, but haven't done so yet. One problem I perceive is having a power cord running through the balcony doors allowing any bugs to wander inside at will. I do NOT like bugs etc. particularly indoors. Good Morning America had Chef Mario Batali grilling up a storm yesterday, if you would like to see his recipes click here.

We had a phone call yesterday from our friends who are vacationing in North Carolina right now, apparently the weather has been great. In fact, looking at the weather map, the weather has been warm over most of the States but of course a lot of that has spawned tornadoes of which there have been many this last few weeks. The main reason they called was to tell us that the friend we went on a cruise with, is in hospital which is not very nice news. I am beginning to think NC isn't so healthy after all, our friends have been getting pretty sick over the past few years and we don't have too many left there any more.

I see Myanmar has finally agreed to allow some helpers in their country, I wonder how many have died because they didn't agree earlier. China is now talking of deaths up to 80,000 from their earthquake. They too have now asked for extra help but at least they sent in thousands of soldiers when the disaster happened and have allocated billions to rebuild the areas which were hit.

Yesterday I made the asparagus soup I posted and it was delicious. I can highly recommend it, very simple to make and worth the small amount of effort. I will be making more, in fact I may freeze some although the recipe calls for the tips to be kept whole, this won't work too well frozen as they will become a mush.

Tonight we are going to have an M & M Meats' Chateaubriand, they have them on special at the 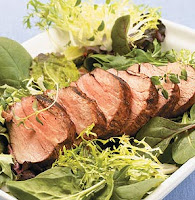 moment so we bought some extra yesterday. I have mentioned them before and they are really very good and good for the money. It will be cooked on our indoor/outdoor grill. I am not sure what we will serve with it, I have about one serving of asparagus left - guess where I will be going tomorrow? Yes, they are open on Sunday. We don't bother with dessert when we are on our own although we frequently have a Ferrero Rocher chocolate each after dinner. Being a Saturday, we will open a nice bottle of wine too, not sure which one. I would like to open one of our Malivoire Pinot Noir, but Matt is saving them for a special occasion???

If you are having a barbecue, this is a good salad to have with it. I have made it several times and we enjoy it very much. If you are not sure how to properly segment or supreme an orange the way the professionals do it, here is a blog entry with pictures click here which will help you. I tend not to cut the peel so square which wastes a lot of the flesh. I have posted this recipe before, but it bears repeating and can be prepared well in advance of the meal.

1. Using a paring knife, remove the peel and pith of the oranges. Separate oranges into segments over a large bowl (to catch the juices), then add segments to bowl. Smoosh rest of orange to remove juice.