Shopping. Movie, This 'n That, Recipe,

I have decided Matt and I should give up eating then we won't have to worry about shopping LOL. Discussing it with my cleaner this morning, she suggested I could get the groceries myself and she could come downstairs and help me bring it upstairs. Brilliant. As she says, I am paying her anyway so it will save me $15 every other week. Can't do it til after mid October as I am going to be going on a course at the Alzheimer Society on Wed. mornings for four weeks. ladydog is going to come and keep Matt company.

Just watched 12 Angry men with Henry Fonda and Lee J. Cobb amongst many other well known actors. Apparently this is the only film Henry Fonda directed and acted in. He didn't do it again because it was too stressful. Did you know that Birgit, you probably did. It is one of my favourite movies, so brilliantly acted. I have seen the local theatre do it once too, very well. They did it again this year but I didn't get to see it. ladydog who is/was very involved in the theatre says it has been produced as 12 Angry Women and also 12 Angry Jurors. It would  be interesting to see the different versions.

I made it to exercise class today as the woman who was picking me up to collect the shopping called and asked if I would change the time. In the end, we agreed she would come for me at 4 so I had lots of time to go to class and also to pop out and do a couple of errands myself. One included getting some fizz as I have to celebrate with it on my birthday. I have booked a table at the Charcoal Steakhouse for Thursday evening (not going out on a Saturday).

I tried to find a copycat recipe for Red Lobster's Dragon Broccoli but although I found pictures, I didn't find a recipe. Pity, it was delicious.

Although I never eat asparagus (other than what I have frozen or pickled) out of season, I know some of you do and I came across this recipe yesterday and have saved it. Maybe you would like to try it. I couldn't find an actual picture, but this looked similar. 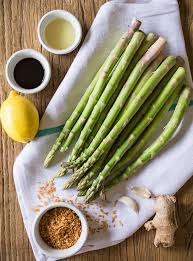 1. Snap tough ends off asparagus. Peel stalks, if desired. In large skillet, bring about 1-inch of water to boiling. Add asparagus and simmer, uncovered, until barely tender, about 4-5 minutes. Drain and dunk in ice water until cold; drain, cover and chill until serving.

2. Meanwhile, combine well all remaining ingredients in medium bowl. Transfer to serving bowl, serve with asparagus spears or cover and chill until serving.

3. Variations: This dip can also be made with the reduced fat versions of mayonnaise and sour cream.