I decided to make the Tuscan Shrimp and White Bean Salad which I posted yesterday. Only thing was, I forgot to take the shrimp out so I could defrost it and cook it. Googled and then cooked the frozen shrimp in  my Instant Pot for one minute. They came out absolutely perfect, better than if I had done it in a saucepan. I was delighted. If you haven't bought one, you really should they are marvellous. The final result of the recipe, with a few tweaks from me, was a delicious meal. I changed the dressing to a regular vinaigrette which, in my opinion, tasted a lot better than the recipe.

Just been watching a programme about super hurricanes in 2017. Must admit, I don't really remember Harvey, Irma and Marie. But they certainly caused some damage. Mind you, we humans are totally stupid to have built on coastlines and islands the way we have. A lot of places we have destroyed the natural protections such as mangrove swamps which acted as a barrier. The global warming is a lot of our fault too which doesn't help. Of course exploding volcanoes adds to the problem as well. Hurricane Dorian seems to be another such storm and I am so very glad we no longer live in North Carolina. We did a lot of running in the 12 years we lived there. We have friends who still live there so I wish them all the best in the next few days.

I thought this was such a good idea for a Pot Pie.

Grace Parisi proves that making potpie doesn't have to take a long time with this one-skillet version, 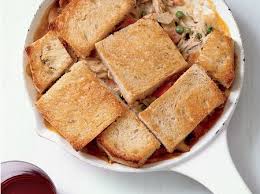 1. Preheat the oven to 425°. In a large ovenproof nonstick skillet, melt 2 tablespoons of the butter. Add the onion, mushrooms and carrots and season lightly with salt and pepper. Cover and cook over high heat, stirring once, until the vegetables are just softened, about 1 minute. Uncover and cook, stirring frequently, until lightly browned, about 5 minutes. Stir in the flour and paprika and cook, stirring, for 1 minute. Add the stock and Madeira and cook, stirring, until blended. Add the milk and bring to a gentle boil. Stir in the chicken and peas and season with salt and pepper. Remove from the heat.

2. Arrange the bread over the chicken mixture, trimming it to fit snugly in a single layer. Brush the bread with the remaining 2 tablespoons of butter. Bake for about 20 minutes, until the filling is bubbling and the bread is golden. Serve right away