A joke from World Wildlife - What has a bed but keeps on running?

Went bowling this afternoon. A little relief but not a lot. I did bowl a 200 game though - my second game was not so hot though.  Next Monday our Winter League starts so hope things are better.

An article from Reader's Digest about the 15 craziest cars ever built. This is one of them. 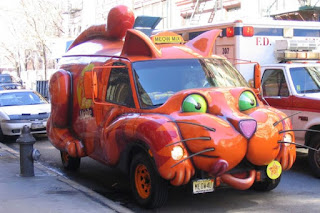 Actually, I think this is rather a fun car, very clever. It was actually parked on NY streets to advertise Meow Mix. There is also a car that beats the speed of sound (on which roads I wonder?) I am surprised they didn't include the one built for a Saudi Arabian which was covered in diamonds!!! Oh, apparently there was more than one, this one sells for $4.8 million. 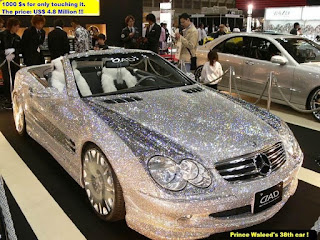 I just thought, what a waste of money. I know these guys have more money than they know what to do with, but.....

We love salmon and ginger so this should be delicious I think. I can't imagine diving 1/4 tsp of salt though. 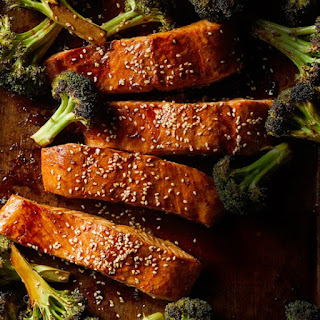 Preheat oven to 425°F. Coat a rimmed baking sheet with cooking spray. Whisk oil, tamari, vinegar, ginger and 1/8 teaspoon salt in a large bowl. Add broccoli and toss to coat. Transfer to the prepared pan using tongs or a slotted spoon, leaving as much marinade as possible in the bowl. Whisk molasses into the remaining marinade. Roast the broccoli for 5 minutes. Move it to one side of the pan and place salmon on the other side. Season the salmon with the remaining 1/8 teaspoon salt and brush with the molasses glaze. Roast until the salmon is just cooked through, 7 to 10 minutes more. Sprinkle with sesame seeds.