Just before we went out to supper, I checked our mail box. In it I discovered a refund cheque for $1.41. A letter saying this was in full settlement of my claim. I had no idea who it was from or what it was about and it kept puzzling me through dinner.  Finally when we got home I looked up the name of the company and realised it was when, months ago, I bought a plug into which nothing would fit. I complained and I guess they decided to send me some money for it. Weird. I will try not to spend it all at once LOL.

We had a fairly quiet day for our Anniversary and went to the Red Lobster fairly early so I could see Jeopardy when we got home. Matt isn't that fussed although he always watches. This time I had Dragon Shrimp which is spicy as all get out and is served with chili pods. No, I did not eat them. Matt had the Yucatan Tilapia again which he enjoyed. He then tried their new dessert which was a Vanilla Bean Cheesecake - Matt loves cheesecake so this was right up his street. We had a coupon each for a free dessert which officially meant we should have had two more people with us, but I persuaded them to give us both freebies. I had a Chocolate Wave Cake which I ended up bringing home, well most of it anyway. Matt ate every bit of his huge dessert. They sure aren't mean about the portions at Red Lobster.

So having stuffed myself with shrimp tonight, I had to give you a shrimp recipe. This looks pretty simple. 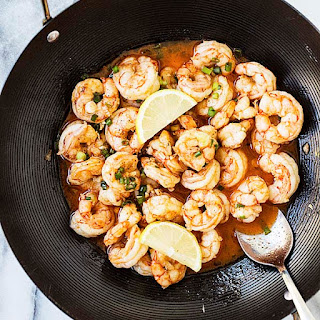 2. Heat up a wok or skillet on medium heat. Add the melted butter, follow by the garlic. Saute the garlic for 10 seconds and add the shrimp. Stir the shrimp back and forth a few times before adding the fish sauce, sugar, ground black pepper and cayenne pepper, if using.

3. Stir and cook, add chopped scallions to the shrimp. Squeeze some lemon juice on top of the shrimp and serve immediately.