Not a very exciting weekend unless you call the shut down of the American government exciting, I guess it is for Americans, although exciting may not be the right word.

As for us the weather hasn't done much although it was thick fog Sunday morning. I commented to Matt that I thought calling England a foggy country was unjust. We get quite a lot of fogs here. He disagreed.

I spent a fair amount of Saturday cooking. Made Spiced Beef in Red Wine which is one of my favourites I also made some marinara sauce, always a good sauce to have on hand. In fact I used some for supper, tossed a few noodles in it to go with our lamb chops and Brussels sprouts.

Our water went out on Saturday morning, the super said it was city wide. It came back later and then this morning, on  my way to the garbage chute a woman was standing there somewhat forlorn - apparently the washer had just stopped on her and she didn't know what to do. I had a look for her and there was water in the tub but nothing happening, the window read something I didn't understand and nor did she. She went to phone a friend in the building who turned out to be a good friend of mine. We were all discussing it and trying to phone the owners of the machines when the super walked in and told us there was a water leak which was being repaired so no water was getting into the machines. Poor woman, only just moved in and first time using the machines.

At least I can bowling tomorrow and then, on Tuesday morning Matt goes to the fracture clinic and at the same time, more or less, I am having a CT scan on my back. It is now a month since he fell down the steps and broke his foot bone - his lateral malleolus if you are interested - and I am hoping the doc will say he can now just use a cane. Fingers crossed.

I love cooking salmon in the oven wrapped up in parchment or foil. So easy. I found this on Bon Appétit

Here’s the one-sheet on cooking in parchment packets: The method creates moist, even heat, which is ideal for fish. It’s hands-off, and the parcels can be assembled ahead of time. If it’s new to you and sounds intimidating, reread the previous two sentences until confidence is instilled. This recipe is 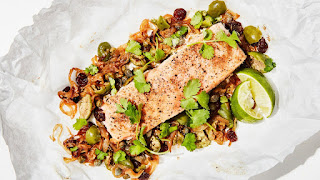 from The Bazaar in Miami Beach, FL.

1. Preheat oven to 275°. Heat 2 Tbsp. oil in a large skillet over medium-low. Add onion, bay leaf, and a pinch of salt and cook, stirring often and reducing heat if onion is browning too fast, until onion is golden brown, 25–30 minutes.

2. Add olives, capers, raisins, and 2 Tbsp. water to skillet and cook, stirring occasionally, until olives are softened, about 4 minutes. Add rum and cook until liquid is evaporated, about 5 minutes. Remove skillet from heat and stir in lime juice and 1 Tbsp. water. If needed, add a splash or two more of water so mixture is saucy; season with salt.

3. Season salmon with salt and pepper. Cut four large sheets of parchment paper. Working with 1 sheet, spoon one-quarter of sauce onto the center of paper; scatter 1 Tbsp. cilantro over. Create a well in the sauce the size of a salmon fillet and place fish in well; drizzle with oil. Gather edges of parchment up and over salmon and tie tightly closed with kitchen twine. Set on a rimmed baking sheet. Repeat with remaining parchment paper, sauce, salmon, and 3 Tbsp. cilantro.

4. Bake packets until salmon is cooked through, 20–22 minutes for medium (go 2 minutes longer for well-done). Remove from oven and let salmon steam in packets 2 minutes. Unwrap and top with more cilantro. Serve with lime wedges for squeezing over.

5. Do Ahead: Sauce can be made 2 days ahead. Let cool; cover and chill. Before using, add water to loosen if it looks tight.