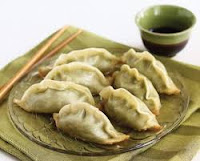 I did go to Mandarin today and gorged myself on dumplings, and 1,000 yr old egg. That was served in a Chinese soup spoon and seemed to be mostly tofu to me! But boy were there some good dumplings. I also tried spicy chocolate ice cream which was about as spicy as milk, but it was good chocolate ice cream. I bought Matt some egg rolls and chicken balls to have for supper. The restaurant have said he can have a rain cheque and book when he is OK again. I think there were more dumplings this year than I ever remember in previous years. I also had some of my favourite kelp salad and of course I started with Hot and Sour Soup.

I am not sure when the New Years Dumpling festival ends, but I will have to make sure I go back before the end. These pix are only 3 of the many they had on offer today.

Tomorrow, Wednesday, I go to exercise classes. I bumped into another English woman who lives in the building, I have known her casually for a while. I didn't really know she lost her husband a year ago. She was sitting in the lobby and said she did so for a change of scene. She was obviously lonely. I suggested she come to classes with me and I am pleased to say she has agreed to come tomorrow. I think she will enjoy it even if she can't do a lot. Many can't at the beginning and end up doing a lot more than they expect, after a while. Not only that there is the camaraderie of the women who participate. We have quite a bit of  fun as well as doing ourselves some good. Maybe I should email our instructor and warn him there is another Limey coming to class. I think I might go bowling after class and I think Matt might come with me!! Not to bowl but just to accompany me. I checked with the alley about my status after missing Monday. I had bowl aheads in the system so apparently only dropped one point on my average. Unfortunately that means there are two of us at the same average. Gotta do something about that. However, I learned my team took 7 out of 9 points which is good.

After being at the Mandarin, I went shopping and tried to be more controlled and shop thinking of what we needed and not what I/we wanted. I did pretty well. Spent less than I expected. I heard this advice on TV a week ago - a woman was saving a lot on groceries by buying what she needed and not what she wanted. I fell by the wayside buying myself a couple of artichokes, I do enjoy them and they are not always available. I didn't buy one thing I needed and then realised I had enough points I wouldn't have to pay for it anyway. Duuh.

I used to love salad sandwiches but mine were not as ornate as this one. Sounds pretty good though. 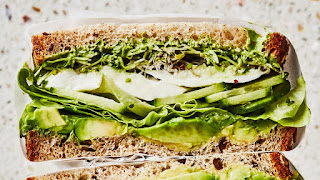 Think of this as a salad sandwiched between two slices of bread.

1. Place chives, mayonnaise, tarragon, and yogurt in a blender. Add zest and juice of 1 lemon half, then add 2 Tbsp. oil; season with salt and pepper. Purée until smooth.

2. Squeeze juice from remaining lemon half over lettuce and cucumbers in a medium bowl. Drizzle with oil; season with salt and pepper. Toss to coat.

3. Divide and smash avocado between 2 slices of bread; season with salt and pepper. Arrange lettuce and cucumbers over. Top with mozzarella and sprouts. Spread remaining 2 slices of bread with ¼ cup green goddess dressing and close sandwiches.