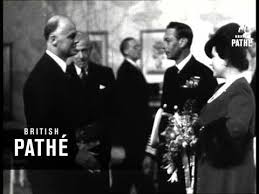 In the comments yesterday, I mentioned that my mother bought a pressure cooker in 1946. In fact she bought it at the Britain Can Make It exhibition which took place in London. Bearing in mind that I was 8 years old, that visit has hung around in my memory pretty well. I remember things like a robot which answered questions (probably a human speaking through it) which I totally believed in at the time, and a shot tower which was for making free fall shot balls (the war was just over remember). The link above will take you to all kinds of interesting pictures. The idea was to show the world we could still make things even after the pounding we took during World War II. The picture is of King George VII and his wife Queen Elizabeth (Queen Mother) opening the exhibition.

Went to exercise class this afternoon (Wednesday) then went to see my doctor about obtaining medical Cannabis. I now have a referral to a clinic in Cambridge, the next town. Not sure why as there is a clinic in Kitchener. Seems a tad odd. Who would have ever thought I would end up taking Marijuana. I understand they do something to the medical version to stop you visiting la la land. Matt isn't convinced it's a good idea, but if they can relieve my pain, well and good. This page lists a heap of conditions which are being treated by medical Cannabis. I didn't realise it was good for so many things. I am glad I left home early, I had the devil of a job parking within my walking range of the doctor's office.

Trying to think of something for supper and deciding I wanted some spaghetti but I had broccoli to use up, I found this recipe. In the end didn't have a lot of time so we just had spaghetti and fried eggs which is one of our favourites.

1 large bunch broccoli, cut into about 4 cups florets and 1 cup thinly sliced stems from close to the 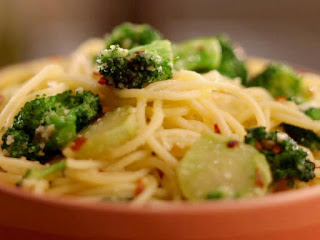 2. Add the spaghetti in the same pot of water. Cook until al dente, about 8 minutes.

3. Meanwhile, add the oil, sliced broccoli stems, red pepper flakes and garlic to a large skillet over medium-low heat and sprinkle with salt. Cook until the garlic is lightly toasted and fragrant, about 8 minutes. Add the florets, toss to coat and warm through.

4. Drain the pasta in a colander set in the sink, and add the pasta to the skillet. Increase the heat to medium-high. Toss the ingredients and adjust the seasoning if needed. Transfer the pasta to a large serving bowl. Squeeze the lemon juice over the top and sprinkle with the Parmigiano-Reggiano. Serve.

Email ThisBlogThis!Share to TwitterShare to FacebookShare to Pinterest
Labels: Britain Can Make It, Medical Cannabis, Spaghetti and Broccoli Aglio Olio