More on Boats, Bits and Pieces. 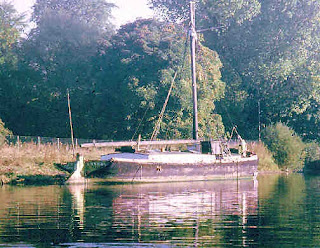 Having hunted high and low, I finally came across this picture which was sent to me a year or two back. It is our Thames Barge Iota now just disintegrating at Windsor apparently. I must say, she doesn't look much like the Iota I remember at all. We had a wheelhouse at the stern for a start.  It is impossible to read the name on the transom (back end) but I was definitely told it was her. Looking at this picture again, I am beginning to wonder. Whichever barge this is though, it is sad to see it so neglected.

Anyway, after Sunfish my father decided to buy a boat which was actually built as a yacht and he found one in, I think, South Africa. She was brought back to England and my parents moved on board with my three young cousins who were being cared for by my parents. We had lots of fun times on Pamara although by then I was living away from my family. My dad retired and took Pamara out to Malta where they lived for a few years taking trips here and yon. For some of their voyages I joined them some I was unable to. I was with them in 1969 when they went to Yugoslavia (as it was then called) and the day I left was the day they walked on the moon. John, first husband, and I caught a cab to the airport and the driver had the radio tuned into the landing. He figured we had a TV on board, we didn't. The broadcast was in English but with commentary in the local language so we had trouble figuring out what was going on. We saw it all when we got back to the UK. My father really never got to see any of it which was a shame as he would have been very interested. They left Malta and cruised the Med stopping at various ports in Italy and France. I joined them in Southern France. Finally ending up in Alicante, Spain where they eventually sold Pamara and bought a delightful house to live in outside the town. I loved that part of Spain. 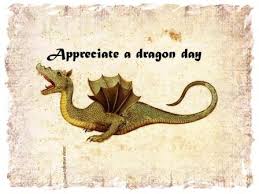 One thing I neglected to tell you about Silver Sunfish, she was used for mine sweeping during the war. Obviously she survived.

Tuesday our Foot Nurse came and was a bit took aback I think to see Matt with his air cast boot. However, he took it off and she treated his feet and mine of course.

Matt finally got his Health Card in the mail too.

Oh, and did you you Tuesday January 16 was Dragon Day?

I am very fond of soups and broths with beans in them so here is one that appealed to me from Bon Appétit today. Great food for dragons.

Brothy Beans and Farro with Eggs and Mushrooms

Stirring a raw egg yolk into each bowl at the end adds silkiness, heft, and protein. But this dish is satisfying without it, too. The secret to delicious-tasting beans is infusing the cooking liquid with aromatics like onions and garlic, then seasoning it liberally at the end until it's just shy of salty 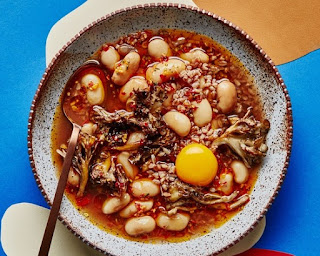 1. Bring onion, carrot, smashed garlic, beans, and 14 cups water to a boil in a medium pot, reduce heat, and simmer, stirring occasionally, until beans are creamy but still intact, 70–90 minutes (time will vary depending on size and age of beans). Using a slotted spoon, transfer beans to a medium bowl; discard onion, carrot, and garlic.

2. Return broth in pot to a boil and add farro. Reduce heat and simmer, stirring occasionally, until grains are tender, 25–30 minutes. Remove from heat and return beans to pot; season generously with salt. Let sit 15 minutes to infuse beans and grains with flavor. (If you have the time, cook the beans and the grains a day ahead so they can really soak up the broth. If not, no worries—just keep going.)

3. Cook chopped garlic, chiles, and ? cup oil in a medium skillet over medium heat, stirring often, until garlic is golden, about 4 minutes. Remove from heat and mix in rosemary. Transfer chile-garlic oil to a small bowl; season with salt.

4. Wipe out skillet and heat remaining 3 Tbsp. oil over medium-high. Cook mushrooms, undisturbed, until browned underneath, about 2 minutes. Toss and continue to cook, tossing every so often, until mushrooms are browned and crisp in most spots, another 6–8 minutes. Splash vinegar over mushrooms, season with salt and pepper, and give skillet a few shakes to combine.

5. Ladle stew into bowls and top each with some crisped mushrooms and an egg yolk (if using); drizzle with chile-garlic oil.

6. Break egg yolk and stir into soup just before eating to give it a more silky consistency.

7. Do Ahead: Stew (without mushrooms, egg yolks, and chile-garlic oil) can be made 3 days ahead. Let cool; cover and chill

Email ThisBlogThis!Share to TwitterShare to FacebookShare to Pinterest
Labels: Brothy Beans and Farro with Eggs and Mushrooms, Iota and Pamara