Invalid, The Next Boat,

By the way, Matt is getting around a bit more now and helping me more so I am not feeling as frazzled. He sees the fracture clinic doc on the 23rd and I wouldn't be surprised if he says Matt can dispense with the air cast - generally referred to as the boot - sometimes not that politely. His physiotherapist has been 3 times and is not coming again until after we have been to the clinic. She has given him a bunch of exercises and told him to walk around the apartment and along the corridor. He is pretty good about walking, not so good at doing the exercises. Over the weekend I did them as well. They are extremely simple but intended to strengthen the leg muscles. 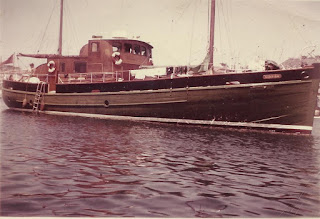 I was asked how long I had lived on the Thames Barge I wrote about yesterday, but I couldn't honestly remember. I know my dad sold it and bought the MFV shown in the picture. The Silver Sunfish. This vessel was a lot hardier than the Thames Barge and could be taken anywhere. Mind you as I have said in the past, they row across the Atlantic. She was a little shorter than the barge which was about 85 ft. long and I think Sunfish was closer to 80 ft.  It's a long time ago now so don't hold me to it. With Sunfish we went further north to Denmark and Norway. Travelling through the Keil Canal where we were met by my German penfriend of the time. Don't think she liked me as I never heard from her again. I always remember her saying how terrified she was hearing Hitler's voice on the radio. WWII was very close at that time. I remember we had a young man crewing for us (on another trip) who spoke German. We dropped into German ports amongst others and he was almost in tears because a young German was telling him about the brutality of the Russians to the German POWs. My father's remarks indicated that it was probably in retaliation for the way the Germans had treated the Russians during the war.

With the Sunfish, Ostend, Belgium became a regular port of call, my parents belonged to the yacht club there and I had all kinds of friends there. We would go dancing and partying particularly at the Kursaal which was more or less what we would call a casino. Because my name is Josephine, I was known as the La Petite Impératrice (Little Empress). At least a couple of my parent's Belgian friends were at my first wedding. We also got gifts from other countries from people we had met during international race meetings in Ostend. Now, many years later I wonder what happened to some of these people. Before my father sold this boat for another, I had gone to live in London in a two room flat with shared bathroom. Bit of a change.

I have no doubt that many of you have an Instant Pot or even a pressure cooker. I have neither but this could be made in a regular pan although it would, of course, take somewhat longer.

Get these spicy South American beans on the dinner table in an hour, no soaking required. The red beans come out tender without falling apart, swimming in a spicy sauce flecked with chorizo and tomatoes. Serve with pan-fried plantains and rice for a simple and satisfying meal. You can find 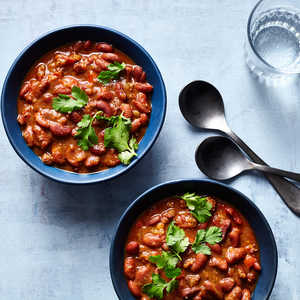