The Crispy Parmesan Potatoes did not work as per the recipe. They came out somewhat undercooked but I found them pretty tasty anyway. Matt, however, would not eat them because they were under done. If and when I try them again, I will par boil them first, which is how we normally cook roast potatoes, and proceed from there, or maybe I should just roast them longer.. Not only that, I opted for Pepper Steak in the end, big mistake, I got complaints about the pepper corns. I didn't crush them sufficiently. Dunno why I bother sometimes. This is from the guy who grinds pepper over everything, and lots of it. He thought the steak itself was delicious though. Oh well. I guess I will not be doing Steak au Poivre ever again.

I have been buried in legal thrillers lately, the Sasha McAndless series by Melissa F. Miller. I am really enjoying them and have recommended them for others to read. Also, Sunday night is Poldark so of course I was glued to the TV. Odd really considering I don't normally watch too much TV. Other than Jeopardy of course.

This is a recipe I found in my recipe programme, it sounds interesting, the picture they supplied didn't look anything like the recipe sounded so I searched for one that did seem to apply. 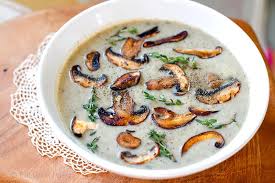 There are many intriguing new varieties to try with flavors subtle and intense. For this appetizer, we combined shiitake, crimini and chanterelle mushrooms for a soup so smooth and rich it doesn't need any added cream.

1. Melt 2 tablespoons butter in a large saucepan over medium heat. Add onions, shallots, celery and carrot. Cook until vegetables soften, 5 to 8 minutes. Stir in the 2 pounds assorted mushrooms, the wine and thyme. Cook 10 to 15 minutes, until mushrooms soften and are lightly browned. Stir in broth and 1/2 teaspoon salt. Bring to boil; reduce heat and simmer until mushrooms are very soft, 35 to 40 minutes.

2. Puree one third of mushroom mixture in blender; transfer to a bowl. Repeat with remaining mixture, then return to saucepan and reheat.