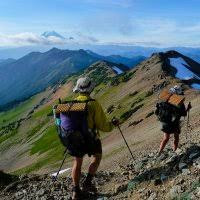 One of the sons working at the bowling alley was telling me he had been hiking this weekend. Funnily enough Matt and I had watched a programme about hiking the Pacific Crest Trail which runs for something like 3,000 miles (from memory) and we figured the people doing the trail were nuts. They start off in searing heat and desert conditions and need to carry gallons of water, then they get to the mountains and have to climb through snow and a high pass, and they pass areas of volcanic activity and pools of boiling acid together with fumeroles and so on and so on. It is apparently a very expensive trip because of all the stuff you need to survive from beginning to end. One girl we were watching had to give up because she ran out of money. She was hauling a pack which was twice as heavy as anyone's. Not only that, she seemed to be wearing flip flops for the first part of the trail??

Following that, there was a fascinating programme about Lady Ada Lovelace and her connection to Charles Babbage who designed a huge calculating machine which Ada had the intelligence to realise could be adapted to do all kinds of mathematical calculations but also to play music and such, i.e. a computer. She has the distinction of writing the first computer programme which heavily influenced Alan Turing who is widely recognised as the original constructor of the computer when he built a machine at Bletchley Park during the war which was able to crack the Enigma code being used by the Germans. This was the subject of the movie The Imitation Game if you ever saw it. I have a copy of it and think it is an excellent film.

Bowling wasn't great today, not sure how many points we took, think only two as we left before the other team had finished. Our last game was abysmal - we accumulated scores of over 900 for our first two games and ended up with 800 and something in the last game. Personally I had one good game. Matt had two.

On the way home, went to return a library book and was going to pick up one and not until we got there did I remember it was a holiday, duuh.

I thought this dish looked and sounded pretty tasty and will be trying it in the not too distant future. It appeared in a list of Spanish recipes. I loved the food of Spain (actually I have always loved the food of any European country I visited) so I share this chicken dish with you.

This Catalan dish, made with chocolate and spices, is reminiscent of Mexican mole, says Janet Mendel. "But without the spiciness of the chiles, it's much easier to pair with wine." The sauce is 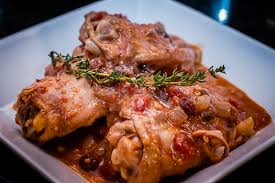 thickened with picada, traditionally a blend of toasted nuts, herbs and garlic

1. Season the chicken with salt and pepper. In a large skillet, heat 2 tablespoons of the oil. Add the chicken, skin side down, and cook over moderately high heat until browned, 4 minutes per side. Transfer to a plate.

3. Meanwhile, preheat the oven to 350°. Toast the bread and almonds on a baking sheet, about 8 minutes.

4. In a skillet, heat the remaining 1/2 tablespoon of oil. Add the garlic and cook over moderate heat until golden, 3 minutes. Transfer to a food processor with the bread and almonds, the chocolate, parsley, cinnamon, saffron, aniseeds and cloves. Process to a paste.

5. Stir the picada into the sauce and simmer over low heat for 15 minutes. Discard the bay leaf and orange zest, season with salt and pepper and serve.