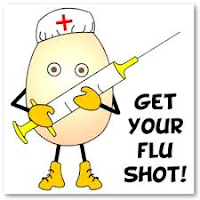 Went for our flu shots Wednesday. I had to have it in my bowling arm because I have a big bruise on my left arm (shades of my tumble). Somebody said to me that they never bothered with flu shots but last year she and hubby both got flu and were sick for 10 days so this year they will be getting the shot. I am usually sore for a day or so after. Matt, of course doesn't even know he's had it done. Amazing, we are both on blood thinners, he is on a major one and didn't bleed one bit, I, of course did bleed. Not much but... Of course the flu shot is free for us. Last time I was in North Carolina they were charging $20 for a shot. Medically I am so glad we live in Canada. We met a Canadian who lived in NC and said how much better it was because taxes were so low. I bet he pays a fortune, one way or another, for medical insurance and/or treatments. Every time we poked our noses inside the hospital it cost us $1,000 and that was some years ago.

We went and played a couple of games today too, I missed my exercise class but figured it was good for Matt to get out to bowl. Plus we enjoy it of course. Just two games, one each, I won the first one

he took the second. One of the owners was teasing me because I had a jacket on and he was wearing shorts still. I assured him he was nuts. Poor Matt wasn't too happy this afternoon as we were sharing a table with 4 women two of whom had very high pitched voices and not only that they take their time about bowling and spend a lot of it chatting. The four are not affiliated with the league playing today so they are always on the same lane where we usually play on a non league day . I get on with them fine but not Matt.

Supper on Wednesday I took some Pea and Lovage Soup out of the freezer. I posted the recipe in 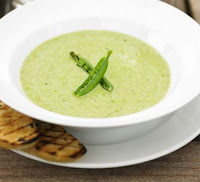 May. I made a batch of it but I had forgotten how delicious it is. I got the Lovage from the dentist's receptionist - I had never tried it before, but it has a very good flavour. I hope she will have plenty more next year. I think I have at least one more serving for us.

I usually post something for Hallowe'en  and I thought these fitted the bill. 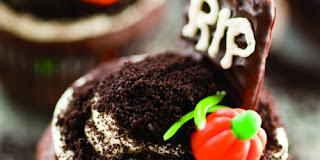 3. In a bowl, combine the flour, baking powder, baking soda and salt. Set aside.

4. In another bowl, combine the sugar and cocoa. Add the oil, eggs, vanilla and beat with an electric mixer at high speed or until mixture is smooth. At low speed, add the dry ingredients alternately with the milk. Scoop the batter into the molds.

5. Bake for approximately 25 minutes or until a toothpick inserted in the centre of a cake comes out clean. Cool and store in an airtight container.

7. In a bowl, beat the butter with the sugar, cream, and vanilla using an electric mixer until smooth and fluffy.

9. In a bowl, combine the egg white and icing sugar with an electric mixer or whisk, until smooth. Add water, if needed.

11. Top the chocolate cupcakes with vanilla frosting. Sprinkle with Oreo cookie crumbs to imitate a dirt-covered ground. For the grass, add thinly slices green licorice sticks. Place a pumpkin candy in the scene.

12. To create tombstones, lightly press a chocolate-covered cookie into each cupcake. Use a pastry bag to write RIP on the “tombstones” with the Royal Icing. Let dry for about 30 minutes