I was surprised to learn that Wimbledon is 140 yrs old.  I was also surprised to learn that in the two weeks of the tennis matches they go through 54,000 tennis balls. that's one hell of a lot of tennis balls. apparently a new ball is required regularly (when I used to play, we used the same all balls for ages). They usually ended up being pretty grungy looking too. I guess the tennis ball manufacturers must love tennis tournaments. I always wanted to play tennis with a ball boy, so much easier than chasing after an errant ball yourself. Needless to say it didn't happen, or at least, extremely infrequently.

Well, I had my chocolate covered bacon today (Tuesday) and enjoyed it very much. My friend could

hardly bear to watch me eat it and Matt has never even tried it. Also had some Maple Glazed Salmon which was actually a tad dry. Not sure why, their salmon is usually very good. Our friend even tried half a cabbage roll - not very Chinese at all. Nor is chocolate covered bacon I guess.  They also had bannocks which I think of as Scottish but they came over with the first immigrants and were adopted by the Indians I gather. Hope I get to go again before the end of the month of celebration for Canada's 150th.  There were some bear paws on the dessert tray too which Matt tried. He ate it all so I guess he liked it. Didn't say. They weren't as big as some bear paws I've seen. 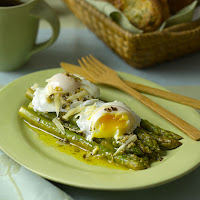 After, we went shopping and the cashier was one I had talked to last week and given my blog address too. She said she had been looking at my recipes but hadn't had time to try any yet. As a working girl you don't really get a lot of time to cook and, as I recall, often feel too tired to do so anyway. Then I took Rogue One back to the library and told them it was unplayable. The librarian found me another copy and I played that fine - I enjoyed it very much. A good prequel.

Having eaten a large lunch we decided to have Asparagus with Poached Eggs and Parmesan, fairly light dish for supper. Will be the last time we can have it til next year. Still got some asparagus left, but nearly at the end. I froze a lot but not the same thing at all.

Thursday morning we have a company coming to look at the A/C. I believe it is totally shot which means a new machine. Problem is it was really pushed into the wall sleeve and I believe will be very difficult to get out. Thank goodness at the moment it isn't too hot.

This is obviously a McCormick's recipe but it sounded so delicious. Whether we can get the marinade mix here or not I don't know. 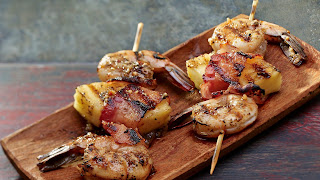 2. Meanwhile, cut bacon slices in half to make 16 pieces. Place 2 layers of paper towels on microwaveable plate. Place 8 pieces of bacon in single layer on paper towels. Cover with 1 layer of paper towel. Microwave on HIGH 2 to 4 minutes or until bacon is partially cooked. Repeat with remaining bacon. Set aside.

3. Peel pineapple then halve lengthwise. Cut off core from each half. Slice pineapple crosswise so pieces are same thickness as shrimp. Wrap 1 piece bacon around each pineapple slice. Remove shrimp from marinade. Discard any remaining marinade. Alternately thread 2 shrimp and a bacon-wrapped pineapple onto each skewer.

4. Grill skewers over medium-high heat 4 to 6 minutes or until shrimp is cooked through, turning occasionally and brushing with reserved marinade.