So, Mr. Simpson got parole. He will be release later this year, October I think. What really surprised me - it was on TV. Why on earth would they have it on TV? How many other prisoners have had their parole hearings televised? I think it was ridiculous. I got brief glimpses of the programme when I went into the bar to get coffee at the alley this afternoon. He has aged considerably plus got fat in the face. It occurred to me that the young man who is working with his dad and granddad, would probably know nothing about it. I think he is about 24. I thought he had been in prison longer but I just read 8 years. 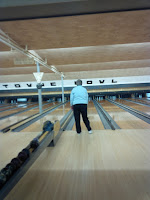 Had to leave bowling early again today, no, not noisy kids, but aching legs on my part. They were particularly bad today. It comes and goes. Matt beat me in both games that we did play. Maybe that's
why I quite LOL. I was talking to a group of women who came from the next town, Cambridge. Their alley has now closed down, the owner is building a high rise, or has sold it so someone can build it, and they were casing the joint to check the road trip and the alley. Some of the people are going to Brantford which is a long way from Cambridge, much further than Kitchener. I told them how much we liked the owners (grandfather, son, grandson). I then told the grandfather that he owed me because I had lied through my teeth telling the women what a nice family they were LOL In fact they are a delightful family. I do so hope they don't decide to sell up for a high rise, they assured me they wouldn't. We have two 5 pin alleys in town now, and no others in the vicinity.

For supper tonight I made a huge cole slaw with a recipe I got from a friend year's ago. It is my favourite cole slaw - good and crispy. I do hate the soggy versions. We had the last of the Jalapeño burgers I bought from our grocery store a few weeks ago. I think I may well by some more of those, they were good.

This recipe so brings to mind my sojourn in North Carolina that I just had to share it. I cannot recall how many times I have fed on such a pot full of delicious food. I am sure it is not exclusive to NC though.

One pot is all you need for this easy Low-Country boil. We added green beans to the classic combination of potatoes, corn, shrimp and sausage to boost the veggie servings for a healthier crowd-pleasing meal. Dump the whole potful out on newspaper and serve with melted butter for dipping and 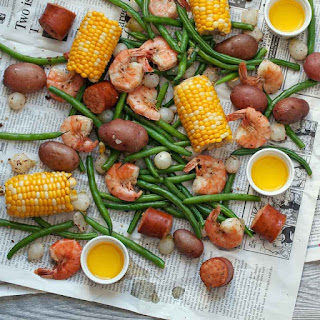 crusty bread to round it all off!

1. Combine water, Old Bay, mustard seeds, coriander seeds, cayenne, dill seed, allspice and bay leaves in a large stockpot. Bring to a boil. Add potatoes and sausage and boil until the potatoes are almost tender, 18 to 20 minutes. Add shrimp, green beans, corn and onions and boil until the shrimp are pink and the vegetables are tender-crisp, 5 to 6 minutes more. Drain and serve with butter (or ghee) for dipping.

Tips
For sustainably raised shrimp, look for shrimp that's certified by an independent agency, such as the Marine Stewardship Council. If you can't find it, choose wild-caught shrimp from North America—it's more likely to be sustainably caught.