I have just completed a questionnaire for the group who run our exercise classes, Community Support Connections. They also do Meals on Wheels and many other services. I didn't know they also sell frozen meals. Interesting, might look into that and see if they are edible!!! Would give me a break now and then. I have a nasty suspicion they would not appeal to us although they sound alright on paper. Same with the Meals on Wheels, I have a list of sample menus which also sound OK, but.... not that I am planning to have them of course. Thankfully I can still manage to cook. Our tastes would be pretty hard to satisfy I think. I may be doing them an injustice of course.

Matt had his senior driving test, well really an acuity or cognitive test, they don't have to drive or anything. Then we went to get/order his new license. No idea how long that will take but they gave him a temp license well into October!!! It was all a tad stressful so I decided I was going to go on strike and we went out to supper at the Red Lobster. It just so happens they are having a crab fest at the moment so guess what I chose? There were Snow Crab legs and Dungeness Crab legs. Prefer the Dungeness, more meat. Together with a corn on the cob which was good too. I thoroughly enjoyed every mouthful. Matt had stuffed mushrooms and then had my favourite their chocolate wave cake. I had a taster but that was all. I was even good and only ate one of their biscuits.

I really like the looks of this recipe and think these would be very "moreish" but will probably never make it as I do not have a stand mixer and the thought of vigorously stirring with a wooden spoon does not appeal. I could have done it once, but not these days.

Pão de queijo, which means “cheese bread” in Portuguese, is a delightful snack from Brazil made with tapioca flour (meaning it's gluten-free) and cheese. Our recipe calls for both Parmesan, which adds a sharp and salty flavor, and farmer's cheese, which is creamy and milky. You definitely want 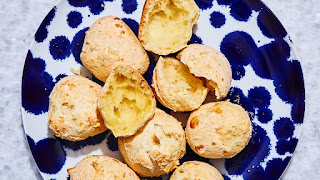 1. Arrange a rack in center of oven; preheat to 425°. Heat milk, butter, salt, and ¼ cup water in a large saucepan over medium-high, stirring occasionally, until butter is melted and mixture begins to boil, about 4 minutes. Remove from heat and add flour; vigorously stir with a wooden spoon until dough is dry and shaggy, about 10 seconds. Transfer to the bowl of a stand mixer fitted with the paddle attachment or a large bowl. Let cool 5 minutes.

4. Bake 5 minutes, then reduce oven temperature to 350° and continue to bake until pão are very light brown, with some darker brown speckles all over (that’s the cheese), and sound hollow when tapped on the bottom, 20-25 minutes. Let cool 10 minutes before serving.