I can't believe that Monday afternoon I was sitting around here with nothing much to do and complaining about a long, boring, afternoon, and I had completely forgotten my exercise class. I didn't, in fact, remember it til I woke up on Tuesday morning. What an idiot. I enjoy seeing the other participants as well as doing the actual exercises (to the best of my ability these days).

Assassin's Fate is now finished. It was a sad/happy ending and caused me a few tears. It really has been a wonderful series. Robin Hobb has been writing these books for 20 years. I suppose she could write more about other characters, but I get the feeling this world is now finished. That also is sad. If you have never read any of Robin Hobb's novels, I highly recommend them.

Viveka of My Guilty Pleasures was recently in Portugal and described a dessert she ate called Abade de Priscos. It sounded and looked so good, I Googled and found a recipe along with a story about the Portuguese Abbot of Priscos who was a whizz in the kitchen. Viveka also mentioned this abbot. The photograph of the dessert was on Viveka's blog take with her trust camera, Oscar. 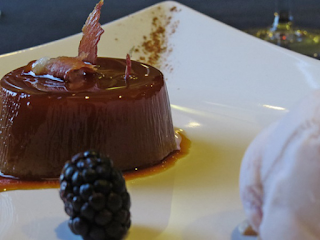 1. Start by making the caramel, placing the 200 g of sugar in a small pan and moderate heat until it becomes a golden, uniform caramel. Once ready, you should spread the caramel on all the sides of a pudding mould.

2. In a second pan add the water, remaining sugar, lemon peel, cinnamon stick and lard cut into thin strips. You should put it to a boil at high temperature until it reaches about 103C / 217F degrees.

3. Take the syrup off of the stove and let it cool down for a while. Add it to the egg yolks mixed with the Port wine.

5. After cooking, allow it to cool down completely before you remove it from the mould.