Facebook does have its uses. Today it brought this video of our son-in-law's art and I thought you might like to see it. I warn you it is quite a long video but really worth looking at. They are mostly done in acrylics but there are some oils. There is a link on this blog to his current art.

I told you it had to be Mercury Retrograde. We now have an expensive car bill to deal with. It ended up Matt came home having left the car to be repaired. This meant that our usual Tuesday afternoon shop had to be abandoned. I complained the garage that we would starve. He thought that was funny. The A/C is now supposed to be installed on Thursday. The tech apologised but as he said, it was out of his control.

This really appeals to me, I like the idea of mini meals in muffin tins, but have never tried it, here is one I might have a go at. For those of you who don't like lamb, I assume you could sub beef instead but that will be such a shame. Obviously the two unusual items, ras al hanout and Aleppo Pepper are an essential item to make this an African spiced dish. 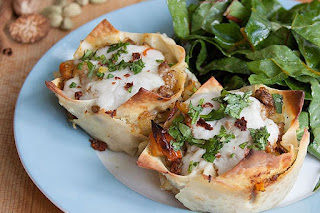 1. Preheat oven to 375º. Stab squash all over with a knife or fork and microwave on high for 8 minutes, flipping halfway through. It should be soft to the touch (but touch it with a towel, it will be hot!). Let it rest while you cook the lamb. Heat 1 T oil in a pan over medium heat and sautée onion with a pinch of salt until beginning to brown. Add 1/2 of garlic and stir until aromatic. Remove to a bowl. Add 1 T oil and cook lamb until cooked through. Add spice mix and hearty pinch of salt and stir to combine. Add onions, tomatoes, apricots and broth, cover and simmer until tomatoes have broken down and liquid starts to thicken (about 5 minutes). Stir in peanut butter until mixture has thickened. Cut squash in half, remove seeds and gently shred with a fork. Heat a pan and toast almonds until brown. Remove. Melt 1 T butter and cook squash for a few minutes. Add remaining garlic and cook until squash begins to brown and liquid has evaporated. Season to taste with salt and pepper. Heat coconut oil in a pot and stir in flour cooking for a few minutes. Whisk in coconut milk and broth and continue stirring until thickened, but smooth. Salt to taste. Oil muffin tins. Place a won ton wrapper in each so that the corners go up the sides. Place a spoon of squash, then lamb, then Béchamel into each. Place another won ton wrapper on top rotated 90º and push gently in the center. Sprinkle almonds, then squash, lamb, sauce again. Bake in oven 15 minutes or until edges are browned, rotating halfway through. Sprinkle with cilantro and aleppo pepper and, if you wish, feta