I am now well into The English Assassin by Daniel Silva which was the first of his books I could get hold of. I am enjoying the book very much thanks to Denise Hammond of My Life in Retirement. I have ordered a couple more of his books from the library. If you like spies and thrillers you would like these too.

Thursday afternoon Matt got his own back for last week and thrashed me over three games. I couldn't bowl worth a damn although I bowled quite well on Wednesday.

The TV was on in the bowling alley and I saw an announcement that this was the
last summer to visit the Panda exhibition in Toronto zoo. Presumably they are going back to China at the end of the year. I would love to go but it is such a vast zoo, I understand, that I could never manage to walk around and last time I asked,, they didn't have motorized carts one could drive around in. Grocery stores do, why not zoos. They do have wheelchairs but that means someone has to push you. I was telling the grandson at the alley about the Pandas and he was unaware that they were only on loan. He said he
had been looking into visiting the African Lion Safari (not very far from here) but that it was close on $40 these days. We used to go there a lot when we first came to Canada and then after we returned from the States, Matt took on part time security work for something to do and was stationed at the Safari Park for a while. At night of course, but he did get to see a lot of the animals and it was during this period that they allowed Matt and I to visit the cheetah orphans that they were "socialising" and we went into the cages with them. Like big pussy cats even though one nipped me in the bum. They were less than a year old.

I've just discovered that, according to Avon, it is National Lipstick Day on the 29th!!! Needless to say they have a special on lipsticks. Never heard of this, have you?

They are tearing up roads near us, we pass by on the way to the bowling alley. Both Wednesday and Thursday there didn't seem to be anybody working there. Very odd. Torn up half of a very busy road and then have abandoned it.  Which reminds me, the construction crew have now fenced off the area below us which presumably means they are planning to start on our balconies any time. They have dug a trench underneath our tier and I have no idea why. They don't seem to have done that anywhere else. Of course this means that I will be moaning and groaning about the noise and everything else - dreading it. Our balcony door will be sealed shut until they have finished. We have two tiny little windows which won't let in a lot of air. The guy who installed our new a/c said it would be OK to run it in the evening when they had gone, but not, of course, whilst they are drilling out all the walls.

I thought these sounded rather tasty although I haven't a clue what Peppadew peppers are, in or out of brine. Will have to do some googling. I have included a link.

Central New York State is known for sandwiches stuffed with juicy skewered meat marinated in Italian dressing; these are tasty enough to serve straight up, but we wouldn’t stop you from putting 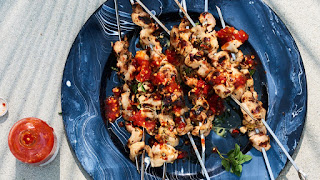 them on soft Italian bread, either.


Whisk garlic, vinegar, peppers, mayonnaise, sugar, dried oregano, and ½ cup oil in a medium bowl; season with salt and pepper. Transfer half of dressing to a small bowl; cover and chill until ready to serve.

Cut chicken thighs lengthwise into long strips, about 1"–1½" wide (you should get 2–3 pieces per thigh). Combine chicken and remaining dressing in a large resealable plastic bag. Seal bag, pressing out any air. Turn to coat and chill at least 20 minutes and up to 1 day.

Meanwhile, drizzle onion with oil; season with salt. Grill until browned on both sides but still firm in center, about 3 minutes per side. Transfer to a large bowl and add tomatoes and a couple splashes of reserved dressing. Toss to coat; season salad with salt and pepper. Top salad and chicken with oregano leaves.

Serve chicken with salad, reserved dressing, and lemon wedges for squeezing over.